Home » Generators » Yamaha » EF1000iS
WE ARE PROUD TO BE INDEPENDENT AND IN NO WAY ASSOCIATED WITH MANUFACTURERS. TO STAY UNBIASED, WE DO NOT ACCEPT FREE PRODUCTS. WE EARN FROM ADVERTISING FEES PAID BY EBAY ON QUALIFYING PURCHASES.

The Yamaha EF1000iS is a quiet, compact and lightweight inverter generator with a rated wattage of 900 W and a starting wattage of 1,000 W.
(Read full specs) 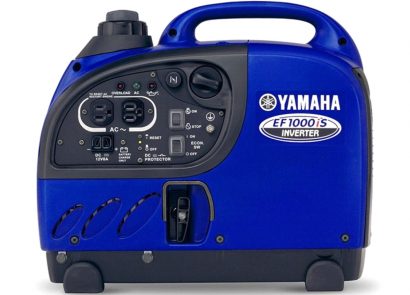 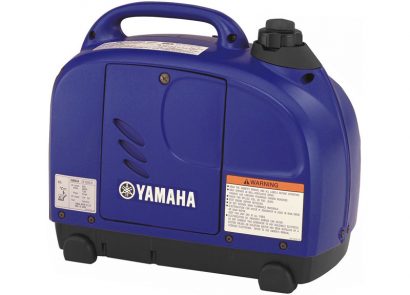 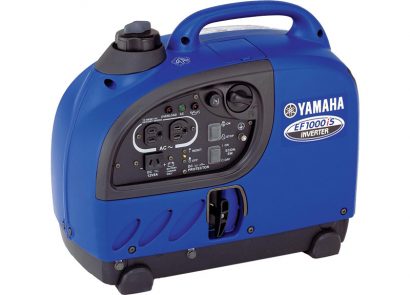 This product was discontinued. For your convenience, we decided to leave this page up.
If you were looking to purchase it, you may want to have a look at the Honda EU1000i, which has similar specs.
You can also try to find it second hand on eBay, by clicking on the button below.

Zoom on the Yamaha EF1000iS

In a nutshell, the Yamaha EF1000iS is a quiet, compact and lightweight portable inverter generator mostly geared towards: 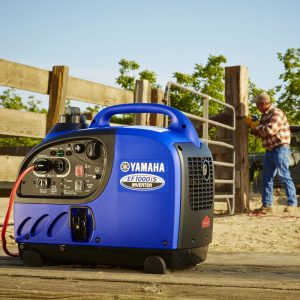 The Yamaha EF1000iS houses a 50 cc Yamaha MZ50 OHV 4-stroke engine, which provides 120V, consumes gasoline and delivers a running wattage of 900W along with a peak wattage of 1,000W.

Enjoying a noise rating of 47 dBA (less noisy than a library), this inverter generator gets running thanks to a simple traditional pull-start mechanism.

Delicate electronics can be plugged in an AC outlets safely, as the EF1000iS generates a clean sine wave, reaching a <2.5% Total Harmonic Distortion (THD).

Furthermore, it has 1 DC outlet: there's a 12V 8A receptacle with which charging your batteries is made easy.

As the Yamaha EF1000iS is an inverter generator, its encased design (L17.7 x W9.4 x H14.9 in) offers more aesthetics than a conventional, open frame product. The design follows the contemporary trends and is perfect for recreationally generating power.

Labeled a lightweight portable generator, the EF1000iS weighs just 27.9 lbs. The generator can be moved with ease by only one person and so it can be enjoyed on-the-go. It can also be carried without effort with a featured handle (molded in the case), further improving its convenience. 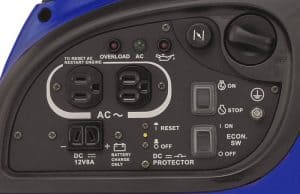 From a security point of view, the generator is equipped with an automatic low oil shut-off (Oil Watch system) and an overload protection (circuit breaker), giving you a peace of mind during use.

Yamaha's Oil Watch warning system gives you an extra peace of mind. This feature enhances long-term durability by preventing engine damage and costly repairs. Once the oil begins to run low, the generator automatically shuts off and cannot be re-started until oil is added.

Regarding its accessories, besides the aforementioned features, the Yamaha EF1000iS's box includes the typical documentation and an owner's manual (opens in a new tab), letting you start it right off the bat.

The Yamaha EF1000iS is EPA-approved and CARB-compliant. Therefore, its sale and purchase are permitted in all of the 50 states, including California.

The Yamaha EF1000iS versus other generators

The following charts are provided to give you an idea of how some of the key specs of the Yamaha EF1000iS compare to generators of similar power (between 500 and 1500 W).

According to our stats, the following comparison is pretty popular: Yamaha EF1000iS vs Honda EU1000i.

Do you own the Yamaha EF1000iS and agree (or disagree) with these strengths and weaknesses?

With a rich history of over 130 years, the Japanese based Yamaha Corporation, founded in 1887, has tipped its fingers in every industry imaginable, most notably motorcycles, musical instruments and electronics. The company boasts with a wide range of products, including many of the top rated portable generators. However, it has been reported that many of the newer models are made in China, rather than Japan.

The Yamaha EF1000iS is covered under a warranty for up to 2 years. This warranty may be limited and may not cover all parts of the generator.
For more information about the warranty of Yamaha generators, please consult Yamaha's warranty policies (opens in a new tab). Alternatively, you can also contact their Customer Support: 1-800-962-7926.