Home » Generators » WEN » DF450i
WE ARE PROUD TO BE INDEPENDENT AND IN NO WAY ASSOCIATED WITH MANUFACTURERS. TO STAY UNBIASED, WE DO NOT ACCEPT FREE PRODUCTS. WE EARN FROM ADVERTISING FEES PAID BY AMAZON ON QUALIFYING PURCHASES.

The WEN DF450i is a quiet and compact dual fuel inverter generator with a rated wattage of 3500 W and a starting wattage of 4500 W.
(Read full specs) 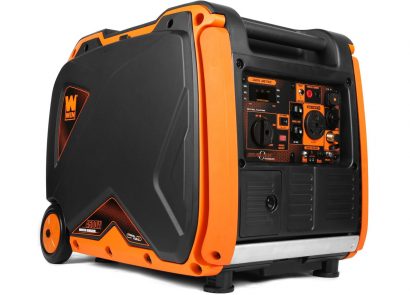 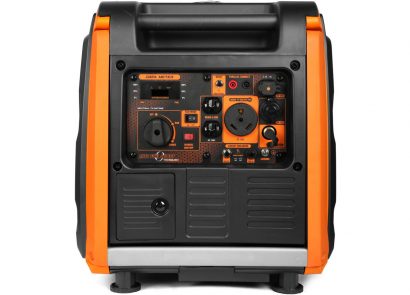 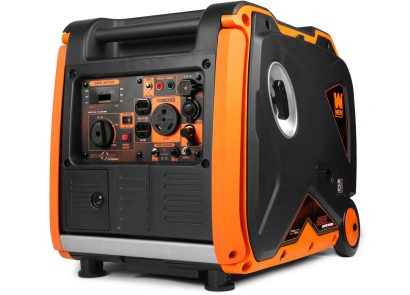 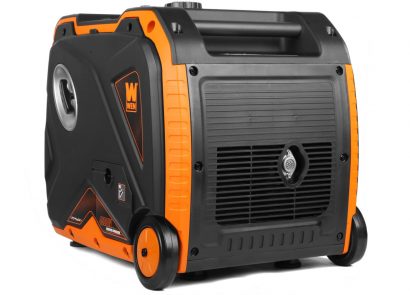 In a nutshell, the WEN DF450i is a quiet and compact portable inverter generator mostly geared towards:

Thanks to its dual-fuel technology, the WEN DF450i delivers 120V and offers power and versatility. When gasoline-powered, it benefits from a running wattage of 3500W and a peak wattage of 4500W. When propane-powered, it has 3150 rated watts and 4500 peak watts. In addition, the device is parallel capable (parallel kit not included) and thus, can be linked to a similar or compatible unit for added power.

WEN’s Auto Fuel Selection technology automatically selects the fuel source (LPG or gasoline) depending on availability and prioritizes LPG. Thus, if a propane tank with enough LPG is connected, the generator will automatically use LPG. If no propane tank is connected, or if there is not enough LPG remaining in the tank, the generator will use gasoline.

The inverter generator is rated for a noise of 58 dBA (less noisy than a conversation at home). Its starting mechanism is based on a conventional pull-start mechanism.

As the DF450i produces a clean sine wave, with a <1.2% Total Harmonic Distortion (THD), sensitive electronics may be plugged in the AC outlets safely.

Furthermore, it has 3 DC outlets: there's a 12V 8A (cigarette lighter style) receptacle with which you may charge your batteries with ease and two 5V USB ports (USB-A) allowing you to conveniently charge electronics such as mobile phones and tablets.

With its TT-30R receptacle (TT as in 'Travel Trailer'), this WEN generator is RV Ready.

The WEN DF450i is an inverter generator and has an encased design of the following dimensions: L23.2 x W18 x H20.1 in. Thus, it is more aesthetical than conventional, open frame products. This type of design is the most modern and convenient way to recreationally generate power.

Since the generator weighs 100 lbs, it will be incredibly difficult to manually lift it and transport it, even though it is technically considered to 'be portable' (in the sense that it is movable). Nevertheless, thanks to its set of 2 wheels and its folding handle (a decent solution to its lack of maneuverability), the generator can be easily moved, once placed the ground. 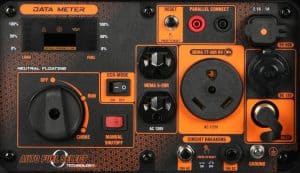 One of the many DF450i's features is the data center, included in its control panel, which conveniently provides information on the voltage, frequency, fuel level, power output and lifetime run hours and thus, helps you monitor its activity and status.

The fuel shutoff feature turns off the flow of fuel, allowing for the DF450i to use up the remaining fuel from the carburetor before automatically shutting down. This helps fight the build-up and blockages caused by stagnant fuel inside the carburetor, minimizing maintenance while prolonging the unit’s lifespan.

With the basic documentation and an owner's manual (opens in a new tab), letting you start the generator quickly, the WEN DF450i also comes with several accessories, including: tool kit, funnel and propane hose.

The WEN DF450i is EPA-approved and CARB-compliant. Thus, selling and purchasing this generator is allowed in each of the 50 states, including California.

The WEN DF450i versus other generators

The following charts are provided to give you an idea of how some of the key specs of the WEN DF450i compare to inverter generators of similar power (between 3000 and 4000 W).

Do you own the WEN DF450i and agree (or disagree) with these strengths and weaknesses?

WEN Products, founded by Nick Anton in 1951, is an American power tool manufacturer and distributor, which claims to have a part in the development of modern chainsaw, soldering devices and wet sharpeners, through its research in random orbital technology. The Illinois based company expanded its distribution network to include various power tools, such as presses, drills and of course, power generators. As a distributor, WEN’s portfolio largely consists of branded products of different manufacturers, imported from Asia.

The WEN DF450i is covered under a warranty for up to 3 years. This warranty may be limited and may not cover all parts of the generator.
For more information about the warranty of WEN generators, please consult WEN's warranty policies (opens in a new tab). Alternatively, you can also contact their Customer Support: 1-847-429-9263.