Home » Generators » Sportsman » GEN4000iOF
WE ARE PROUD TO BE INDEPENDENT AND IN NO WAY ASSOCIATED WITH MANUFACTURERS. TO STAY UNBIASED, WE DO NOT ACCEPT FREE PRODUCTS. WE EARN FROM ADVERTISING FEES PAID BY TRACTOR SUPPLY ON QUALIFYING PURCHASES.

The Sportsman GEN4000iOF is a compact open frame inverter generator with a rated wattage of 3500 W and a starting wattage of 3850 W.
(Read full specs) 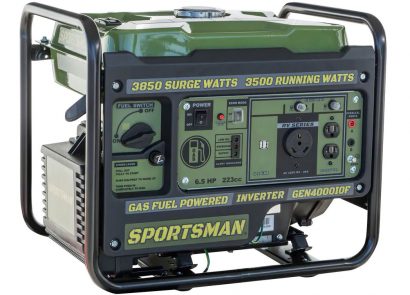 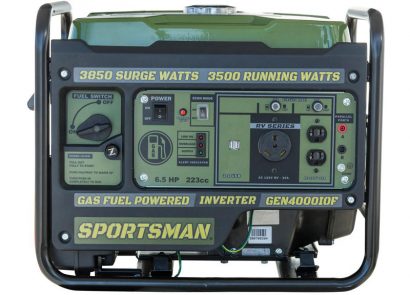 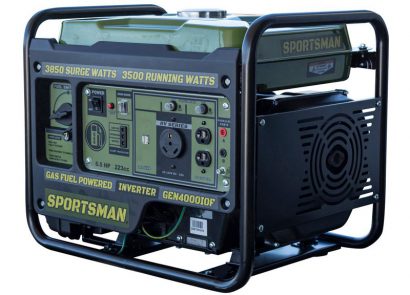 Set Price Alert
×
Notify me when the price drops
Set an alert for the Sportsman GEN4000iOF - Current lowest price: $549.99

Zoom on the Sportsman GEN4000iOF

In a nutshell, the Sportsman GEN4000iOF is a compact portable inverter generator mostly geared towards: 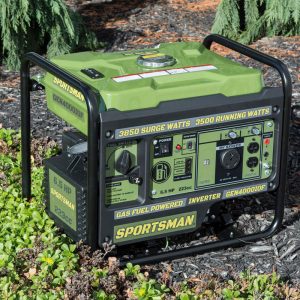 The Sportsman GEN4000iOF's design includes a gasoline-fueled 223 cc (6.5 hp) OHV 4-stroke engine. With a 120V output, it gives a running wattage of 3500W and also a peak wattage of 3850W. Moreover, since it is parallel capable (parallel kit not included), its power may be doubled if linked to a second compatible unit.

The inverter generator is rated for a noise of 65 dBA (just slightly more noisy than an office). Its starting mechanism is based on a conventional pull-start mechanism.

Sensitive electronics can be safely plugged in the AC outlets, as the GEN4000iOF produces a clean sine wave, with a <5% Total Harmonic Disruption (THD).

This Sportsman generator is RV Ready, as it features a TT-30R receptacle (TT stands for 'Travel Trailer').

The Sportsman GEN4000iOF has the following dimensions: L23 x W17.5 x H20.3 in. In combination with its conventional, open frame design, they provide support and allow the generator to be raised above ground level. The device has been designed for tough environments and demanding outdoor use.

The 93 lbs of the GEN4000iOF's dry weight enables you to use it anywhere you will ever need. Additionally, the generator’s mobility is also improved by its open frame design, as it can be easily grabbed and shifted. 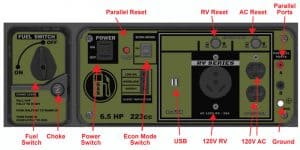 The fuel level of the inverter generator can be determined quickly, easily, and conveniently with the help of its built-in fuel gauge.

Besides the usual set of documentation and owner's manual (opens in a new tab) to get you promptly started, Sportsman also included a tool kit in the GEN4000iOF's packaging.

The Sportsman GEN4000iOF is EPA approved, but NOT CARB-compliant. Thus, it cannot be purchased or sold in California.

The Sportsman GEN4000iOF versus other generators

The following charts are provided to give you an idea of how some of the key specs of the Sportsman GEN4000iOF compare to generators of similar power (between 3000 and 4000 W).

As you can see from this interactive chart, when compared to other 3000-4000W generators, the Sportsman GEN4000iOF is on the average side of the price range.

Do you own the Sportsman GEN4000iOF and agree (or disagree) with these strengths and weaknesses?

The Sportsman GEN4000iOF is covered under a warranty for up to 1 year. This warranty may be limited and may not cover all parts of the generator.
For more information about the warranty of Sportsman generators, please contact the Buffalo Tools Customer Support: 1-636-532-9888.