Home » Generators » Sportsman » GEN4000DF-SS
WE ARE PROUD TO BE INDEPENDENT AND IN NO WAY ASSOCIATED WITH MANUFACTURERS. TO STAY UNBIASED, WE DO NOT ACCEPT FREE PRODUCTS. WE EARN FROM ADVERTISING FEES PAID BY AMAZON, EBAY, TRACTOR SUPPLY OR UNBEATABLE SALE ON QUALIFYING PURCHASES.

The Sportsman GEN4000DF-SS is a compact open frame dual fuel generator with a rated wattage of 3500 W and a starting wattage of 4000 W.
(Read full specs) 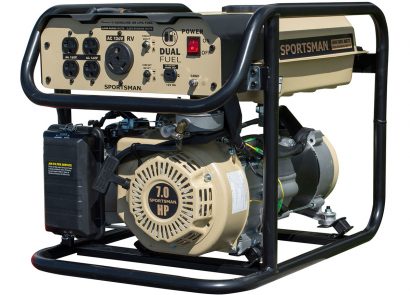 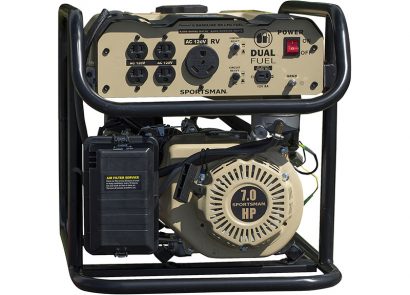 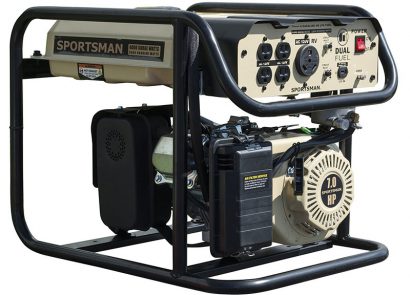 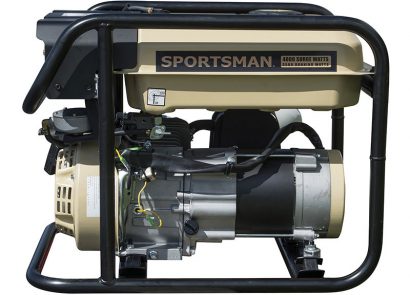 Set Price Alert
×
Notify me when the price drops
Set an alert for the Sportsman GEN4000DF-SS - Current lowest price: $399.99

Zoom on the Sportsman GEN4000DF-SS

In summary, the Sportsman GEN4000DF-SS is a compact portable generator especially useful for: 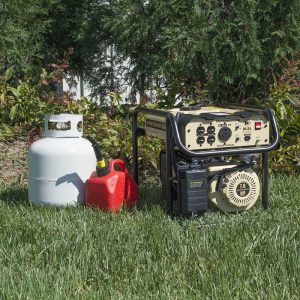 With its dual-fuel technology, the powerful and versatile Sportsman GEN4000DF-SS provides an output of 120V. While gasoline-powered, it gives a running wattage of 3500W along with a peak wattage of 4000W. While propane-powered, it provides 3100 rated watts and 3600 starting watts.

The generator is rated for a noise of 69 dBA (less noisy than background music). Its starting mechanism is based on a simple traditional pull-start mechanism.

Additionally, it features 1 DC outlet: there's a 12V 8A receptacle with which you may charge your batteries with ease.

This Sportsman generator is RV Ready, thanks to its TT-30R receptacle (TT stands for 'Travel Trailer').

The dimensions of the Sportsman GEN4000DF-SS, which are L23 x W19.5 x H17.5 in, and its typical, open frame design provides stability and enables the generator to be raised above ground level. The featured design is ideal for the outdoors and all tough environments.

As the GEN4000DF-SS's weight is only 91 lbs, it can follow you and your power needs anywhere. Moreover, its open frame design makes it incredibly easy to grab the frame in order to change its location.

With the basic documentation and an owner's manual (opens in a new tab), letting you start the generator quickly, the Sportsman GEN4000DF-SS also comes with several accessories, including: tool kit, propane hose, battery charging cables and funnel.

The Sportsman GEN4000DF-SS is EPA approved, but NOT CARB-compliant. Thus, it cannot be purchased or sold in California.

The Sportsman GEN4000DF-SS versus other generators

The following charts are provided to give you an idea of how some of the key specs of the Sportsman GEN4000DF-SS compare to dual fuel generators of similar power (between 3000 and 4000 W).

As you can see from this interactive chart, when compared to other 3000-4000W dual fuel generators, the Sportsman GEN4000DF-SS is on the cheap side of the price range.

Do you own the Sportsman GEN4000DF-SS and agree (or disagree) with these strengths and weaknesses?

The Sportsman GEN4000DF-SS is covered under a warranty for up to 1 year. This warranty may be limited and may not cover all parts of the generator.
For more information about the warranty of Sportsman generators, please contact the Buffalo Tools Customer Support: 1-636-532-9888.