Home » Generators » Pulsar » PG3250
WE ARE PROUD TO BE INDEPENDENT AND IN NO WAY ASSOCIATED WITH MANUFACTURERS. TO STAY UNBIASED, WE DO NOT ACCEPT FREE PRODUCTS. WE EARN FROM ADVERTISING FEES PAID BY AMAZON, EBAY OR HOMEDEPOT ON QUALIFYING PURCHASES.

The Pulsar PG3250 is a compact open frame portable generator with a rated wattage of 2500 W and a starting wattage of 3250 W.
(Read full specs) 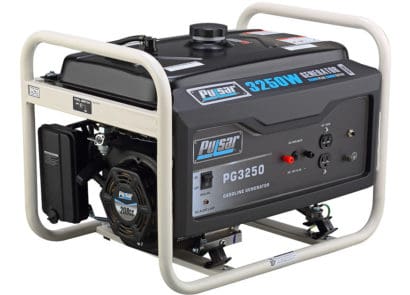 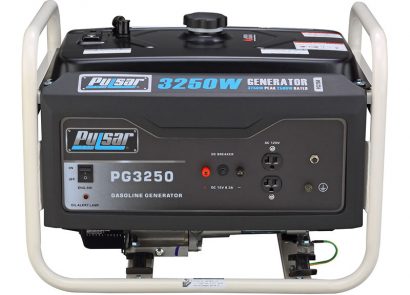 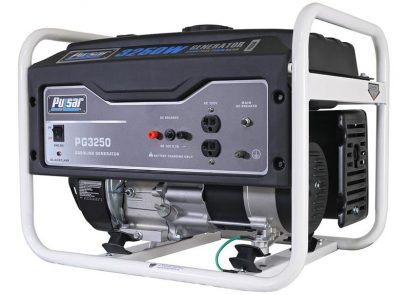 Set Price Alert
×
Notify me when the price drops
Set an alert for the Pulsar PG3250 - Current lowest price: $280.00
Price alert for: ebay.com

Designed for bigger portable jobs, this 3250 peak watt generator is large enough to operate a major appliance and small enough to take to a job site or outdoor events such as hunting, fishing, camping, tailgating or even on a boat. Operating for up to 16 hours on 4.0 gallons of gasoline at only 68 dB of noise, the PG3250 has two 120V and one 12V outlet to power anything from battery chargers to refrigerators, yet this unit is light enough to carry and compact enough to fit in the trunk of many cars. (source: Pulsar (opens in a new tab))

In a nutshell, the Pulsar PG3250 is a compact portable generator mostly geared towards: 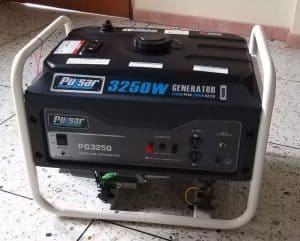 With a noise rating of 68 dBA (less noisy than a normal conversation), the generator features a simple traditional pull-start mechanism.

Additionally, it features 1 DC outlet: there's a 12V 8A output allowing you to easily charge your batteries.

The dimensions of the Pulsar PG3250, which are L23.6 x W17.5 x H17.9 in, and its typical, open frame design provides stability and enables the generator to be raised above ground level. The device has been designed for tough environments and demanding outdoor use.

The PG3250's dry weight of 87 lbs lets you use its power anywhere needed. Moreover, grabbing and moving this product is made even easier by its open frame design. 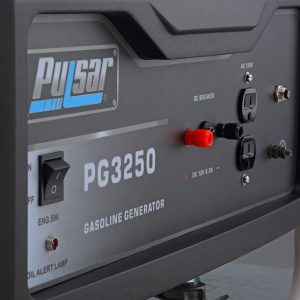 When its oil levels are insufficient, you will be informed by the featured light indicator.

As for its accessories, apart from the previously mentioned features, the Pulsar PG3250 also comes with the basic documentation and an owner's manual (opens in a new tab), allowing you to start it right away.

The Pulsar PG3250 is EPA approved, but NOT CARB-compliant. Thus, it cannot be purchased or sold in California.

The Pulsar PG3250 versus other generators

The following charts are provided to give you an idea of how some of the key specs of the Pulsar PG3250 compare to generators of similar power (between 2000 and 3000 W).

As you can see from this interactive chart, when compared to other 2000-3000W generators, the Pulsar PG3250 is on the cheap side of the price range.

Do you own the Pulsar PG3250 and agree (or disagree) with these strengths and weaknesses?

Pulsar is a brand registered under the Pulsar Products inc., based in California, USA. The company offers a decent choice of air compressors, pressure washers and of course, generators – which range from 1,2 kW to 10 kW and include dual fuel and RV-Ready designs. Pulsar has several facilities scattered throughout the US, including two distribution centers – one in California and second in Illinois. However, the production of their products seems to be outsourced overseas, to the continent of Asia.

The Pulsar PG3250 is covered under a warranty for up to 1 year. This warranty may be limited and may not cover all parts of the generator.
For more information about the warranty of Pulsar generators, please contact the Pulsar Customer Support: 1-866-591-8921.