Home » Generators » Honda » EU7000iS
WE ARE PROUD TO BE INDEPENDENT AND IN NO WAY ASSOCIATED WITH MANUFACTURERS. TO STAY UNBIASED, WE DO NOT ACCEPT FREE PRODUCTS. WE EARN FROM ADVERTISING FEES PAID BY RETAILERS ON QUALIFYING PURCHASES.

The Honda EU7000iS is a quiet inverter generator with a rated wattage of 5500 W and a starting wattage of 7000 W.
(Read full specs) 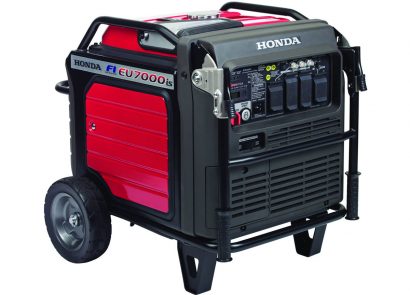 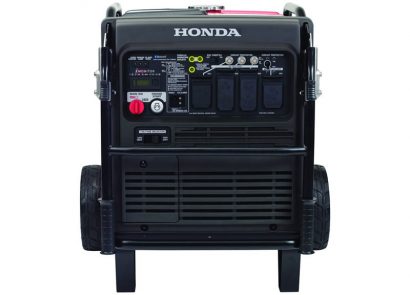 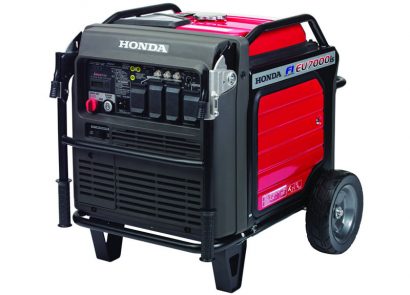 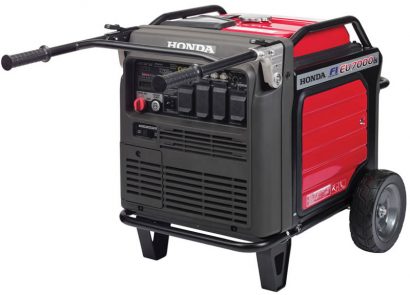 In summary, the Honda EU7000iS is a quiet portable inverter generator especially useful for: 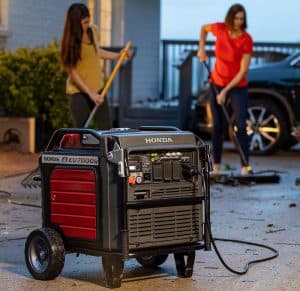 The Honda EU7000iS's design includes a gasoline-fueled 389 cc Honda GX390 EFI OHV 4-stroke engine. With a 120/240V output, it gives a running wattage of 5500W and also a peak wattage of 7000W. In addition, the device is parallel capable (parallel kit not included) and thus, can be linked to a similar or compatible unit for added power.

The inverter generator features a simple traditional pull-start mechanism and also a convenient and easy-to-use electric starter (battery included). It is rated for a noise of 52 dBA (just slightly more noisy than a conversation at home). To add further convenience, the EU7000iS can be remotely started (via the My Generator App).

Sensitive electronics can be safely plugged in the AC outlets, as the EU7000iS produces a clean sine wave, with a <3% Total Harmonic Disruption (THD).

This Honda generator isn't quite RV Ready, but it features an L5-30R receptacle, allowing a simple RV connection through an L5-30P to TT-30R adaptor. Besides, as the EU7000iS holds a twist-lock L14-30R receptacle, it is transfer switch ready: you'll easily be able to connect it to your breaker box to power your home during a power outage.

The Honda EU7000iS is an inverter generator and has an encased design of the following dimensions: L33.4 x W27.6 x H28.4 in. Thus, it is more aesthetical than conventional, open frame products. The featured design follows the latest trends and is ideal for easy and recreational use.

Although this generator is technically considered 'portable' (in the sense that it can be moved), its 263.2 lbs make it incredibly difficult to manually lift and transport. However, this lack of maneuverability is compensated by its wheel kit and its folding handle, with which you can conveniently shift it, once it's on the ground.

A digital iMonitor™ data center, one of the features of the EU7000iS's control panel, gives you information on the lifetime run hours, power output and voltage, and thus, is helpful for the monitoring of its activity and status.

The inverter generator allows for a quick, easy and convenient assessment of its gas level, as it is equipped with a built-in fuel gauge.

As far as security is concerned, the generator can be used with a peace of mind, as it features an automatic low oil shut-off (Oil Alert®) and an overload protection (circuit breaker).

As for its accessories, apart from the previously mentioned features, the Honda EU7000iS also comes with the basic documentation and an owner's manual (opens in a new tab), allowing you to start it right away. An official storage cover is available, as a separate purchase.

Honda My Generator helps you monitor your unit

The Honda My Generator App (available on iOS and Android) makes owning the EU7000iS even more flexible and convenient, whether you are depending on it at home during a power outage, or enjoying an adventure at a remote campsite.

The app connects your unit and your phone via Bluetooth, across a 75-foot line of sight, giving you valuable information about your generator's operation and many additional features in the palm of your hands.

With it, you can easily monitor a range of information such as output power, lifetime run hours, oil life, fuel level, or estimated remaining runtime. You’ll also receive warnings and notifications to remind you of routine maintenance.

Even better, the app allows you to control multiple, compatible Honda generators from a single mobile device, and to remotely start and stop the EU7000iS without a key fob.

The Honda EU7000iS is EPA-approved and CARB-compliant. Therefore, its sale and purchase are permitted in all of the 50 states, including California.

The Honda EU7000iS versus other generators

The following charts are provided to give you an idea of how some of the key specs of the Honda EU7000iS compare to generators of similar power (between 5000 and 6000 W).

As you can see from this interactive chart, when compared to other 5000-6000W generators, the Honda EU7000iS is on the expensive side of the price range.

Do you own the Honda EU7000iS and agree (or disagree) with these strengths and weaknesses?

The Honda EU7000iS is covered under a warranty for up to 3 years. This warranty may be limited and may not cover all parts of the generator.
For more information about the warranty of Honda generators, please consult Honda's warranty policies (opens in a new tab). Alternatively, you can also contact their Customer Support: 1-770-497-6400.