Home » Generators » Honda » EB2200i
WE ARE PROUD TO BE INDEPENDENT AND IN NO WAY ASSOCIATED WITH MANUFACTURERS. TO STAY UNBIASED, WE DO NOT ACCEPT FREE PRODUCTS. WE EARN FROM ADVERTISING FEES PAID BY RETAILERS ON QUALIFYING PURCHASES.

The Honda EB2200i is a quiet, compact and lightweight inverter generator with a rated wattage of 1,800 W and a starting wattage of 2,200 W.
(Read full specs) 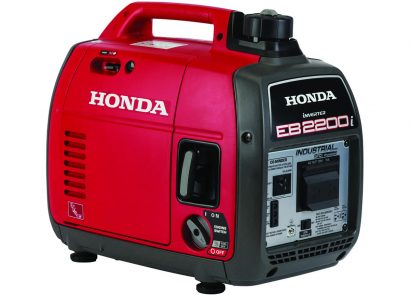 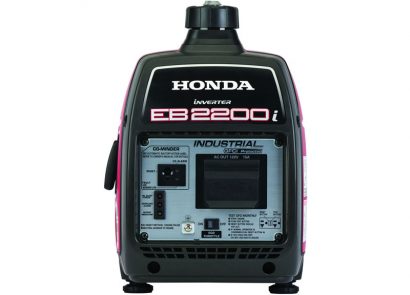 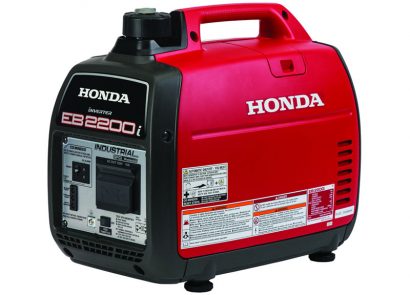 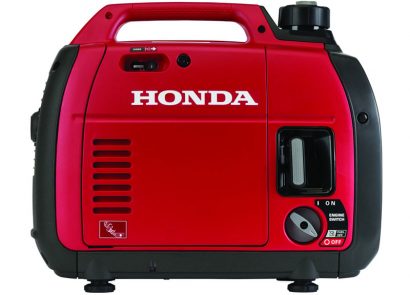 In summary, the Honda EB2200i is a quiet, compact and lightweight portable inverter generator especially useful for: 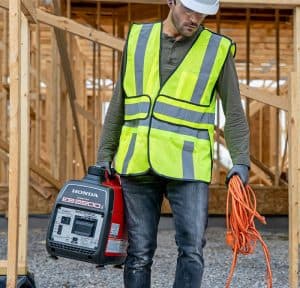 Presented in our list of the 10 quietest portable generators for its low noise rating of 48 dBA (less noisy than a library), the inverter generator features a conventional pull-start mechanism.

Delicate electronics can be plugged in an AC outlets safely, as the EB2200i generates a clean sine wave, reaching a <3% Total Harmonic Distortion (THD).

Since the Honda EB2200i is an inverter generator, its closed design (L20 x W11.4 x H16.7 in) has an esthetical advantage over conventional, open frame devices. The design follows the contemporary trends and is perfect for recreationally generating power.

Weighing just 47.4 lbs, the EB2200i can be considered a lightweight portable generator. A single person should not have any problems moving it around and thus, enjoy power availability on-the-go. This convenience is further enhanced thanks to its handle (molded in the case) that allows you to carry it with ease. 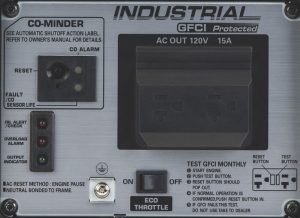 As for its security measures, the device features an overload protection (circuit breaker) and an automatic low oil shut-off (Oil Alert®), letting you use it with a peace of mind.

As for its accessories, apart from the previously mentioned features, the Honda EB2200i also comes with the basic documentation and an owner's manual (opens in a new tab), allowing you to start it right away. 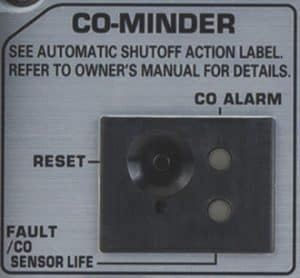 The Honda EB2200i is EPA approved, but NOT CARB-compliant. Thus, it cannot be purchased or sold in California.

The Honda EB2200i versus other generators

The following charts are provided to give you an idea of how some of the key specs of the Honda EB2200i compare to inverter generators of similar power (between 1500 and 2500 W).

According to our stats, the following comparison is pretty popular: Honda EB2200i vs Honda EU2200i.

As you can see from this interactive chart, when compared to other 1500-2500W inverter generators, the Honda EB2200i is on the expensive side of the price range.

Do you own the Honda EB2200i and agree (or disagree) with these strengths and weaknesses?

The Honda EB2200i is covered under a warranty for up to 3 years. This warranty may be limited and may not cover all parts of the generator.
For more information about the warranty of Honda generators, please consult Honda's warranty policies (opens in a new tab). Alternatively, you can also contact their Customer Support: 1-770-497-6400.