Home » Generators » Generac » GP15000E (5734)
WE ARE PROUD TO BE INDEPENDENT AND IN NO WAY ASSOCIATED WITH MANUFACTURERS. TO STAY UNBIASED, WE DO NOT ACCEPT FREE PRODUCTS. WE EARN FROM ADVERTISING FEES PAID BY RETAILERS ON QUALIFYING PURCHASES. 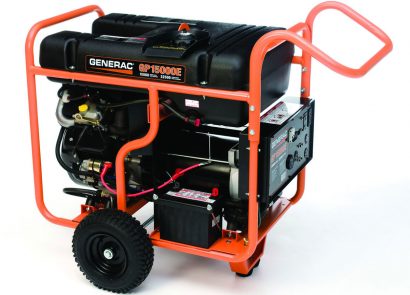 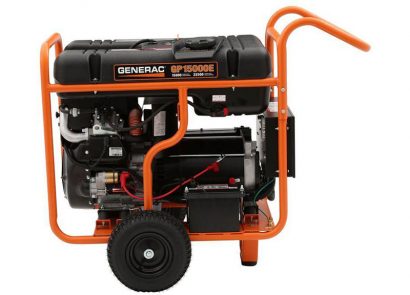 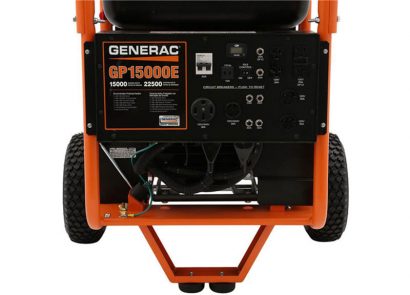 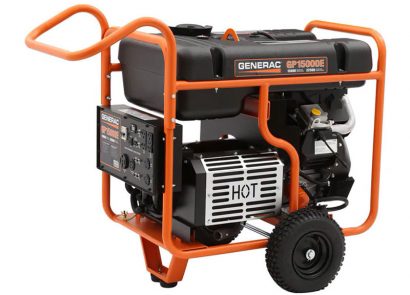 Set Price Alert
×
Notify me when the price drops
Set an alert for the Generac GP15000E - Current lowest price: $2,839.00
Price alert for: homedepot.com

A portable unit ideal for applications requiring a large amount of power without being permanent. Ideal for job sites and emergency applications. (source: Generac (opens in a new tab))

In a nutshell, the Generac GP15000E is a powerful portable generator mostly geared towards professionals who want to be able to deliver results, even during a power failure. 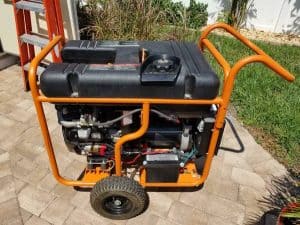 Its starting mechanism is based on a simple and elegant electric starter (battery included).

As the GP15000E has a relatively high THD (<20%), it is not recommended to use it to power sensitive electronic devices.

In addition, it provides 1 DC outlet: there's a 12V 10A receptacle with which you may charge your batteries with ease.

This Generac generator isn't quite RV Ready, but it features an L5-30R receptacle, allowing a simple RV connection through an L5-30P to TT-30R adaptor. Besides, since the GP15000E bears a twist-lock L14-30R receptacle, it is transfer switch ready: it is easily connectible to a breaker box and can power your home in case of a power outage.

The Generac GP15000E has a conventional, open frame design, of the following dimensions: L48.5 x W31 x H39.5 in, which offers support and allows it to be raised above ground level. The featured design is ideal for the outdoors and all tough environments.

Even though this device may be technically portable (as in movable), manipulation and transportation without special equipment can be a challenge, as it weighs 363 pounds. Nevertheless, thanks to its wheel kit (⌀12.3") and its handle (a decent solution to its lack of maneuverability), the generator can be easily moved, once placed the ground.

To help you monitor the GP15000E's status and activity, its control panel is equipped with a digital data center, giving you information on the lifetime run hours.

With the basic documentation and an owner's manual (opens in a new tab), letting you start the generator quickly, the Generac GP15000E also comes with several accessories, including: tool kit and funnel.

The Generac GP15000E is EPA approved, but NOT CARB-compliant. Thus, it cannot be purchased or sold in California.

The Generac GP15000E versus other generators

The following charts are provided to give you an idea of how some of the key specs of the Generac GP15000E compare to generators of similar power (between 14000 and 18000 W).

As you can see from this interactive chart, when compared to other 14000-18000W generators, the Generac GP15000E is on the cheap side of the price range.

Do you own the Generac GP15000E and agree (or disagree) with these strengths and weaknesses?

The Generac GP15000E is covered under a warranty for up to 2 years. This warranty may be limited and may not cover all parts of the generator.
For more information about the warranty of Generac generators, please consult Generac's warranty policies (opens in a new tab). Alternatively, you can also contact their Customer Support: 1-888-GENERAC (888-436-3722).