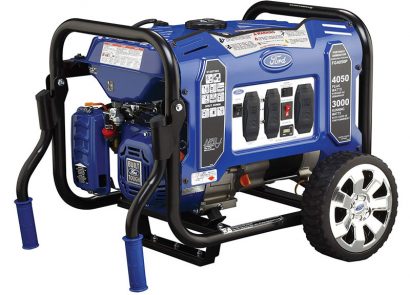 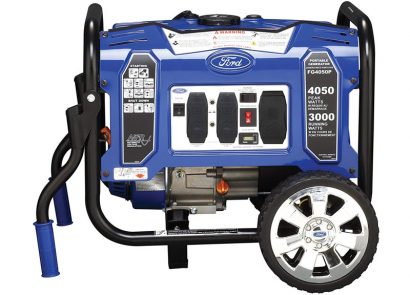 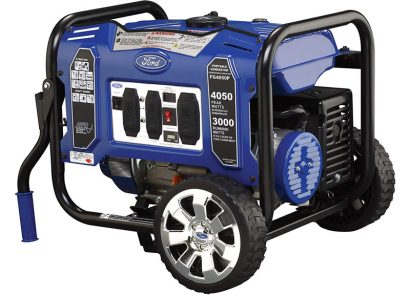 In a nutshell, the Ford FG4050P is a portable generator mostly geared towards:

At a noise rating of 76 dBA (less noisy than a dishwasher), the generator is started via a conventional pull-start mechanism.

The fuel capacity of 4 gallons allows the FG4050P to operate for around 11 hours at 50% load with a full tank (fuel consumption around 0.36 GPH).

Due to the featured twist-lock L14-30R receptacle, the FG4050P is transfer switch ready: you may connect it to a breaker box to power your household during a power outage.

With its dimensions of L28 x W26 x H22 in, the conventional, open frame design of the Ford FG4050P offers stability and allows the generator to be raised above ground level. The device has been designed for tough environments and demanding outdoor use.

Since the generator weighs 108.7 lbs, it will be incredibly difficult to manually lift it and transport it, even though it is technically considered to 'be portable' (in the sense that it is movable). However, this lack of maneuverability is compensated by its wheel kit (⌀8") and its folding handle, with which you can conveniently shift it, once it's on the ground. 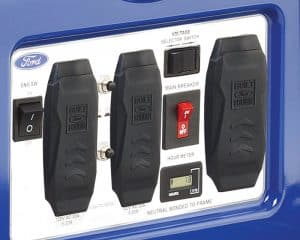 Monitoring of the FG4050P's status and activity is made possible by a digital data center, which provides information on the lifetime run hours and is one of the features of its control panel.

With the basic documentation and an owner's manual, letting you start the generator quickly, the Ford FG4050P also comes with several accessories, including: oil, tool kit and funnel.

The Ford FG4050P is EPA-approved and CARB-compliant. Therefore, its sale and purchase are permitted in all of the 50 states, including California.

The Ford FG4050P versus other generators

The following charts are provided to give you an idea of how some of the key specs of the Ford FG4050P compare to generators of similar power (between 2500 and 3500 W).

Do you own the Ford FG4050P and agree (or disagree) with these strengths and weaknesses?

Even though Ford is most commonly known for Henry Ford's Ford Motor Company, the historically renowned US-based car manufacturer founded in 1903, its trademark appears on various other products, including power equipment. Ford Power Equipment sells affordable portable generators, water pumps and pressure washers. While generators are licensed under the Ford trademark, they are in fact manufactured and distributed by Pulsar Inc., which manufactures its products in Asia. However, the company promises great customer service, pre-delivery testing, and their products receive overall very good reviews.

We currently do not have any warranty information regarding the Ford FG4050P.
For more information about the warranty of Ford generators, please contact the Ford Customer Support: 1-866-591-8921.