Home » Generators » Firman » WH02942
WE ARE PROUD TO BE INDEPENDENT AND IN NO WAY ASSOCIATED WITH MANUFACTURERS. TO STAY UNBIASED, WE DO NOT ACCEPT FREE PRODUCTS. WE EARN FROM ADVERTISING FEES PAID BY AMAZON OR EBAY ON QUALIFYING PURCHASES.

The Firman WH02942 is a quiet and compact dual fuel portable inverter generator with a rated wattage of 2900 W and a starting wattage of 3200 W.
(Read full specs) 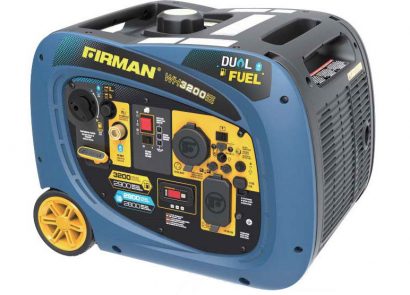 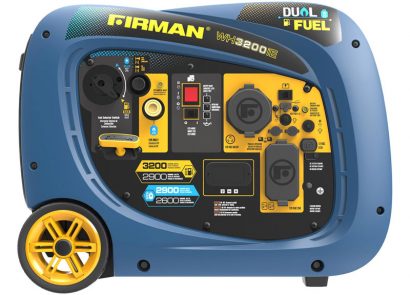 Set Price Alert
×
Notify me when the price drops
Set an alert for the Firman WH02942 - Current lowest price: $998.97
Price alert for: ebay.com

The FIRMAN WH02942 Inverter generator features 3200 starting watts and 2900 running watts. Power is supplied by our Max Pro Series 171cc FIRMAN engine which runs cool and efficient thanks to its Phoenix Fat Head Block. Our Whisper Series muffler keeps the Wh02942 running a quiet 58 decibels – well below the standards set by the National Parks Service, and our spark arrester has been approved by the USDA Forest Service. The 1.8-gallon fuel capacity provides a whopping 9 hours of run time. Starting is simple with the reliable FIRMAN electric start system. (source: Firman (opens in a new tab))

In a nutshell, the Firman WH02942 is a quiet and compact portable inverter generator mostly geared towards: 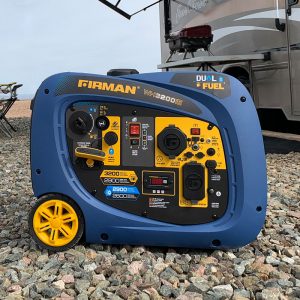 With its dual-fuel technology, the powerful and versatile Firman WH02942 provides an output of 120V. While gasoline-powered, it gives a running wattage of 2900W along with a peak wattage of 3200W. While propane-powered, it provides 2600 rated watts and 2900 starting watts. In addition, the device is parallel capable (Firman parallel kit (opens in a new tab) not included) and thus, can be linked to a similar or compatible unit for added power.

At a noise rating of 58 dBA (less noisy than a quiet suburb), this inverter generator can be started via a conventional pull-start mechanism, or a simple and elegant electric starter (battery included).

Delicate electronics can be plugged in an AC outlets safely, as the WH02942 generates a clean sine wave, reaching a <3% Total Harmonic Disruption (THD).

It also sports 2 DC outlets: there's a 5V USB port allowing you to conveniently charge electronics such as mobile phones and tablets and a 12V 8A receptacle allowing you to easily charge your batteries.

With its TT-30R receptacle (TT as in 'Travel Trailer'), this Firman generator is RV Ready.

Since the Firman WH02942 is an inverter generator, its closed design (L23.2 x W17.8 x H17.9 in) has an esthetical advantage over conventional, open frame devices. The design follows the contemporary trends and is perfect for recreationally generating power.

The WH02942's dry weight of 97 lbs lets you use its power anywhere needed. Furthermore, once placed on the floor, effortless displacement is possible thanks to its wheel kit (⌀5") and its folding handle. 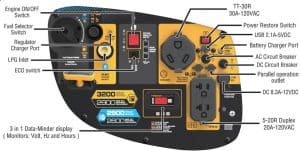 The WH02942 and its control panel include a convenient meter, which displays voltage, frequency and lifetime hours. This feature comes handy when monitoring its status and activity.

While the standard documentation and an owner's manual (opens in a new tab), helpful for starting the device promptly, come with the Firman WH02942, the following accessories are also included: tool kit, funnel, propane hose, battery charger and oil.

The Firman WH02942 is EPA-approved and CARB-compliant. Thus, selling and purchasing this generator is allowed in each of the 50 states, including California.

The Firman WH02942 versus other generators

The following charts are provided to give you an idea of how some of the key specs of the Firman WH02942 compare to generators of similar power (between 2500 and 3500 W).

As you can see from this interactive chart, when compared to other 2500-3500W generators, the Firman WH02942 is on the average side of the price range.

Do you own the Firman WH02942 and agree (or disagree) with these strengths and weaknesses?

Unlike many websites, we did our best to research each of the specs above. That being said, we are not immune to making the occasional mistake or omission. Should you notice any missing or incorrect values, don't hesitate to suggest improvements so we can address the issue.
* Propane runtime is our own estimation, based on a 20 lbs tank and NIST 1994 GGE (Gasoline Gallon Equivalent) formula: 5.66 lbs of propane = 1 gal of gasoline.

The Firman WH02942 is covered under a lifetime warranty. This warranty may be limited and may not cover all parts of the generator.
For more information about the warranty of Firman generators, please consult Firman's warranty policies (opens in a new tab). Alternatively, you can also contact their Customer Support: 1-844-FIRMAN1 (844-347-6261).