Home » Generators » Firman » H07552
WE ARE PROUD TO BE INDEPENDENT AND IN NO WAY ASSOCIATED WITH MANUFACTURERS. TO STAY UNBIASED, WE DO NOT ACCEPT FREE PRODUCTS. WE EARN FROM ADVERTISING FEES PAID BY AMAZON, EBAY OR ACE HARDWARE ON QUALIFYING PURCHASES.

The Firman H07552 is a portable open frame dual fuel generator with a rated wattage of 7500 W and a starting wattage of 9400 W.
(Read full specs) 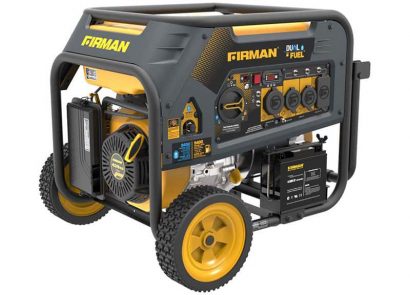 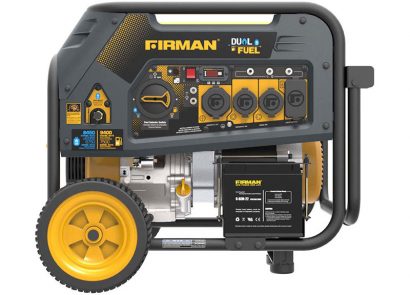 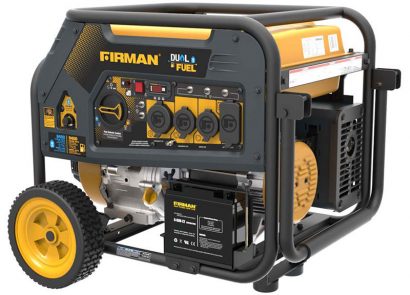 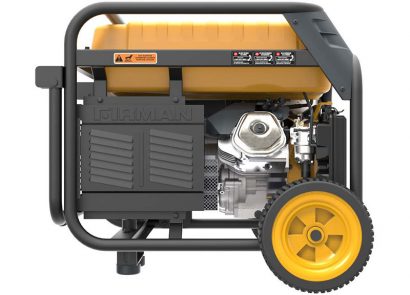 The FIRMAN H07552 generator features 9,400 starting Watts and 7,500 running watts (8,450/6,750 LPG). Power is supplied by our Max Pro Series 439cc FIRMAN engine which runs cool and efficient thanks to its Phoenix Fat Head Block. Our Whisper Series muffler keeps the H07552 quieter and efficient, and our spark arrester has been approved by the USDA Forest Service. The industry-leading 8 gallon fuel capacity provides a whopping 12 hours of run time. Starting is as simple as the push of a button on the H07552. (source: Firman (opens in a new tab))

In summary, the Firman H07552 is a portable generator especially useful for: 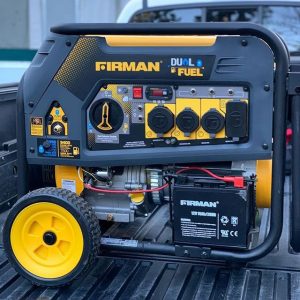 Thanks to its dual-fuel technology, the Firman H07552 delivers 120/240V and offers power and versatility. When gasoline-powered, it benefits from a running wattage of 7500W and a peak wattage of 9400W. When propane-powered, it has 6750 rated watts and 8450 peak watts.

The generator is rated for a noise of 74 dBA (just slightly more noisy than a dishwasher). Its starting mechanisms include a conventional pull-start mechanism and a simple and elegant electric starter (battery included).

The powering of sensitive electronic devices with the H07552 is not recommended due to its relatively high THD (<25%).

This Firman generator features an L5-30R receptacle, enabling an easy RV connection via an L5-30P to TT-30R adaptor. However, it is still not quite RV ready. Besides, as the H07552 holds a twist-lock L14-30R receptacle, it is transfer switch ready: you'll easily be able to connect it to your breaker box to power your home during a power outage.

With its dimensions of L30.2 x W27.5 x H26.3 in, the conventional, open frame design of the Firman H07552 offers stability and allows the generator to be raised above ground level. The design is ideal for rough environments and demanding outdoor use.

As the generator's weight is 212 pounds, manually moving it or transporting it may be challenging, despite the fact that it is technically considered 'portable' (movable). Nevertheless, thanks to its wheel kit (⌀10") and its folding handle (a decent solution to its lack of maneuverability), the generator can be easily moved, once placed the ground.

The H07552 and its control panel include a convenient meter showing you voltage, frequency and lifetime hours. This feature comes handy when monitoring its status and activity.

With the basic documentation and an owner's manual (opens in a new tab), letting you start the generator quickly, the Firman H07552 also comes with several accessories, including: tool kit, funnel, oil, cover and propane hose.

The Firman H07552 is EPA-approved and CARB-compliant. Thus, selling and purchasing this generator is allowed in each of the 50 states, including California.

The Firman H07552 versus other generators

The following charts are provided to give you an idea of how some of the key specs of the Firman H07552 compare to generators of similar power (between 7000 and 8000 W).

According to our stats, the following comparison is pretty popular: Firman H07552 vs Firman H07553.

As you can see from this interactive chart, when compared to other 7000-8000W generators, the Firman H07552 is on the cheap side of the price range.

Do you own the Firman H07552 and agree (or disagree) with these strengths and weaknesses?

Unlike many websites, we did our best to research each of the specs above. That being said, we are not immune to making the occasional mistake or omission. Should you notice any missing or incorrect values, don't hesitate to suggest improvements so we can address the issue.
* Propane runtime is our own estimation, based on a 20 lbs tank and NIST 1994 GGE (Gasoline Gallon Equivalent) formula: 5.66 lbs of propane = 1 gal of gasoline.

The Firman H07552 is covered under a warranty for up to 3 years. This warranty may be limited and may not cover all parts of the generator.
For more information about the warranty of Firman generators, please consult Firman's warranty policies (opens in a new tab). Alternatively, you can also contact their Customer Support: 1-844-FIRMAN1 (844-347-6261).