Home » Generators » ECHO » EGi-1200
WE ARE PROUD TO BE INDEPENDENT AND IN NO WAY ASSOCIATED WITH MANUFACTURERS. TO STAY UNBIASED, WE DO NOT ACCEPT FREE PRODUCTS. WE EARN FROM ADVERTISING FEES PAID BY AMAZON, ACME TOOLS, EBAY OR ZORO ON QUALIFYING PURCHASES.

The ECHO EGi-1200 is a compact and lightweight inverter generator with a rated wattage of 1,000 W and a starting wattage of 1,200 W.
(Read full specs) 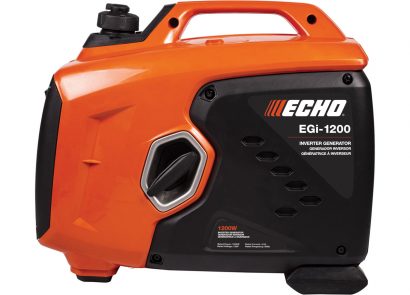 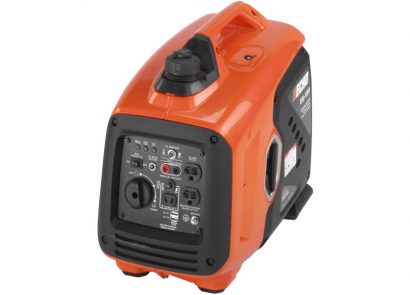 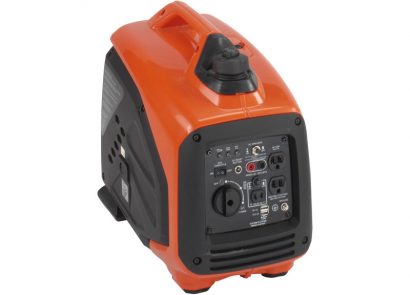 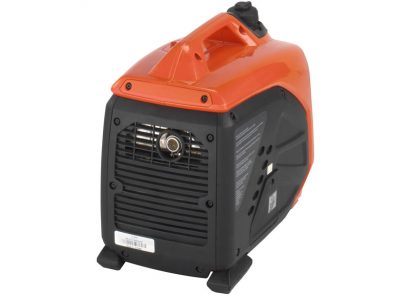 When you just have to get out there and enjoy being with nature, friends and family, take ECHO's EGi-1200 generator with you. It's ultra quiet when compared to other generators. It's small, compact, lightweight with a handle making it easy to grab and go. Good things come with those who camp and tailgate. (source: ECHO (opens in a new tab))

In summary, the ECHO EGi-1200 is a compact and lightweight portable inverter generator especially useful for: 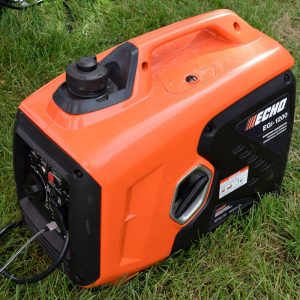 The ECHO EGi-1200 is powered by a 60 cc OHV 4-stroke engine. It delivers 120V, runs on gasoline and offers a running wattage of 1,000W as well as a peak wattage of 1,200W. Additionally, as the generator is parallel capable (parallel kit not included), it can be linked to a second unit for more power.

At a noise rating of 64 dBA (just slightly more noisy than background music), the inverter generator is started via a simple traditional pull-start mechanism.

The EGi-1200 produces a clean sine wave: thanks to a <3% Total Harmonic Distortion (THD), your sensitive electronics can be safely plugged in the AC outlets.

It also sports 3 DC outlets: there's a 12V 5A receptacle with which you may charge your batteries with ease and two 5V USB ports with which charging of electronics like mobile phones and tablets is made convenient.

Since the ECHO EGi-1200 is an inverter generator, its closed design (L16 x W11 x H16 in) has an esthetical advantage over conventional, open frame devices. The featured design follows the latest trends and is ideal for easy and recreational use.

Labeled a lightweight portable generator, the EGi-1200 weighs just 30 lbs. The device can be easily moved by just one person and thus, its power may be enjoyed on-the-go. Further convenience is provided by its handle (molded in the case), as it allows you to carry it effortlessly.

Good to know: This unit ranks 7th in our list of the 10 smallest portable generators. 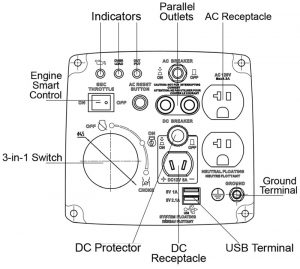 Security-wise, this product benefits from an overload protection (circuit breaker) and an automatic low oil shut-off, which gives you a complete peace of mind when using it.

As for its accessories, apart from the previously mentioned features, the ECHO EGi-1200 also comes with the basic documentation and an owner's manual (opens in a new tab), allowing you to start it right away.

The ECHO EGi-1200 is EPA-approved and CARB-compliant. It can therefore be sold and purchased in all 50 states, including California.

The ECHO EGi-1200 versus other generators

The following charts are provided to give you an idea of how some of the key specs of the ECHO EGi-1200 compare to inverter generators of similar power (between 1000 and 2000 W).

As you can see from this interactive chart, when compared to other 1000-2000W inverter generators, the ECHO EGi-1200 is on the average side of the price range.

Do you own the ECHO EGi-1200 and agree (or disagree) with these strengths and weaknesses?

ECHO Incorporated was founded in 1972 in Northbrook, IL as the Kioritz Corporation of America. In 1978, the name was changed to its current form. While it is the largest subsidiary of the Yamabiko Corporation of Japan, its US headquarters is located in Lake Zurich, IL, near Chicago. ECHO manufactures most of its products in the US, with parts from both domestic and foreign suppliers. Its wide range of outdoor power products includes portable generators, pressure washers, trimmers, blowers, and chainsaws. The company prides itself on a pro-environmental approach including the three segments of technology, conservation, and sustainability.

The ECHO EGi-1200 is covered under a warranty for up to 3 years. This warranty may be limited and may not cover all parts of the generator.
For more information about the warranty of ECHO generators, please consult ECHO's warranty policies (opens in a new tab). Alternatively, you can also contact their Customer Support: 1-800-432-ECHO (3246).