Home » Generators » DuroStar » DS4850EH
WE ARE PROUD TO BE INDEPENDENT AND IN NO WAY ASSOCIATED WITH MANUFACTURERS. TO STAY UNBIASED, WE DO NOT ACCEPT FREE PRODUCTS. WE EARN FROM ADVERTISING FEES PAID BY RETAILERS ON QUALIFYING PURCHASES.

The DuroStar DS4850EH is an open frame dual fuel portable generator with a rated wattage of 3850 W and a starting wattage of 4850 W.
(Read full specs) 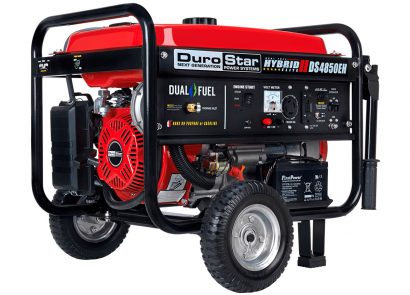 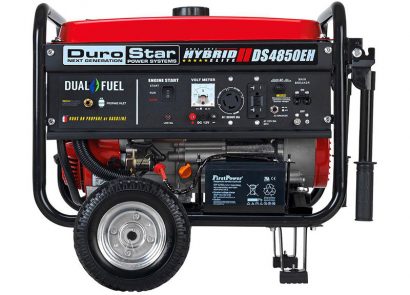 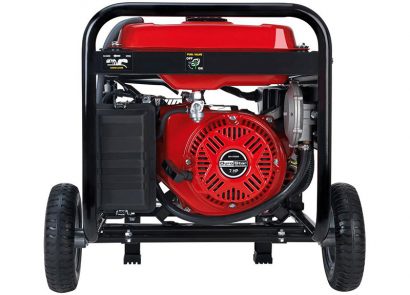 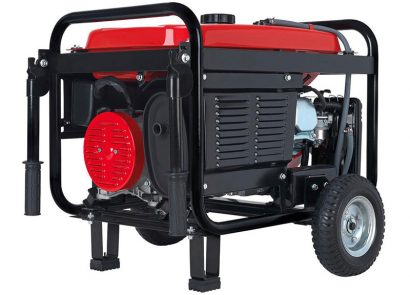 Set Price Alert
×
Notify me when the price drops
Set an alert for the DuroStar DS4850EH - Current lowest price: $499.00

As global energy consumption grows at exponential rates, so does the demand for energy solutions that are both more environmentally responsible and more efficient. The DuroStar DS4850EH has a dual fuel system that operates on either standard gasoline or cleaner burning liquid propane which can more than double you generator's run time. (source: DuroStar (opens in a new tab))

Zoom on the DuroStar DS4850EH

In summary, the DuroStar DS4850EH is a portable generator especially useful for: 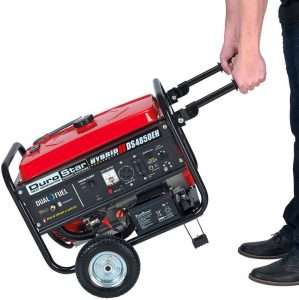 With its dual-fuel technology, the powerful and versatile DuroStar DS4850EH provides an output of 120/240V. While gasoline-powered, it gives a running wattage of 3850W along with a peak wattage of 4850W. While propane-powered, it provides 3658 rated watts and 4608 starting watts.

The generator is rated for a noise of 69 dBA (less noisy than background music). Its starting mechanisms include a simple traditional pull-start mechanism and a simple and elegant electric starter (battery included).

The DS4850EH is unsuitable for the powering of sensitive electronic devices due to its relatively high THD (<12%).

Furthermore, it has 1 DC outlet: there's a 12V 8A output with which you may charge your batteries with ease.

Due to the featured twist-lock L14-30R receptacle, the DS4850EH is transfer switch ready: you may connect it to a breaker box to power your household during a power outage.

The DuroStar DS4850EH has a conventional, open frame design, of the following dimensions: L25 x W24 x H21 in, which offers support and allows it to be raised above ground level. The generator is designed for ideal use outdoors and in rough environments.

Although this generator is technically considered 'portable' (in the sense that it can be moved), its 122 lbs make it incredibly difficult to manually lift and transport. Nevertheless, it can still be moved quite conveniently with the help of its wheel kit and its folding handle, once it is placed on the ground.

To help you monitor the DS4850EH's status and activity, its control panel is equipped with a handy voltmeter that allows you to easily monitor power output anytime.

In addition to this info, a light indicator shows you if the oil level is too low.

Along the basic documentation and an owner's manual (opens in a new tab), useful for starting the generator right away, the DuroStar DS4850EH's package also includes these accessories: propane hose, tool kit, funnel and battery charging cables.

The DuroStar DS4850EH is EPA-approved and CARB-compliant. Thus, selling and purchasing this generator is allowed in each of the 50 states, including California.

The DuroStar DS4850EH versus other generators

The following charts are provided to give you an idea of how some of the key specs of the DuroStar DS4850EH compare to generators of similar power (between 3500 and 4500 W).

As you can see from this interactive chart, when compared to other 3500-4500W generators, the DuroStar DS4850EH is on the average side of the price range.

Do you own the DuroStar DS4850EH and agree (or disagree) with these strengths and weaknesses?

The DuroStar DS4850EH is covered under a warranty for up to 3 years. This warranty may be limited and may not cover all parts of the generator.
For more information about the warranty of DuroStar generators, please consult DuroStar's (DuroMax) warranty policies (opens in a new tab). Alternatively, you can also contact their Customer Support: 1-844-DUROMAX (844-387-6629).