Home » Generators » DuroMax » XP4000S
WE ARE PROUD TO BE INDEPENDENT AND IN NO WAY ASSOCIATED WITH MANUFACTURERS. TO STAY UNBIASED, WE DO NOT ACCEPT FREE PRODUCTS. WE EARN FROM ADVERTISING FEES PAID BY AMAZON OR EBAY ON QUALIFYING PURCHASES. 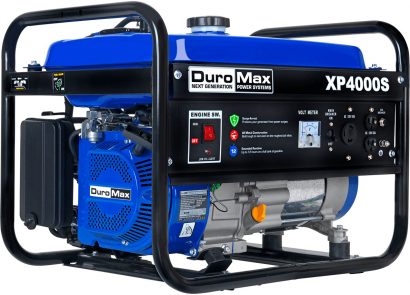 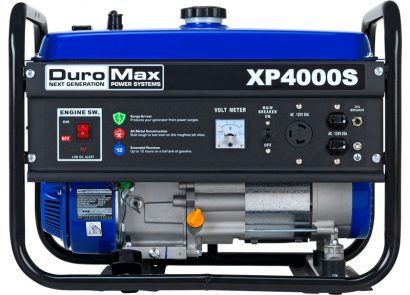 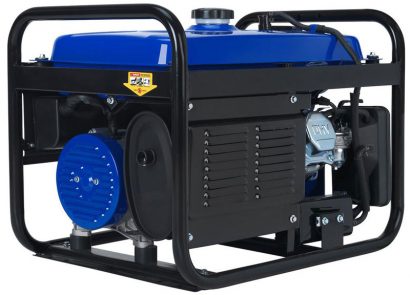 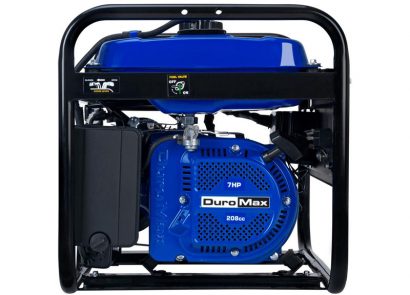 Set Price Alert
×
Notify me when the price drops
Set an alert for the DuroMax XP4000S - Current lowest price: $291.00

The DuroMax XP4000S 4,000 Watt generator is designed for light duty emergency backup applications. This generator has everything a great generator needs, but at a price that everybody wants. (source: DuroMax (opens in a new tab))

Zoom on the DuroMax XP4000S

In a nutshell, the DuroMax XP4000S is a compact portable generator mostly geared towards: 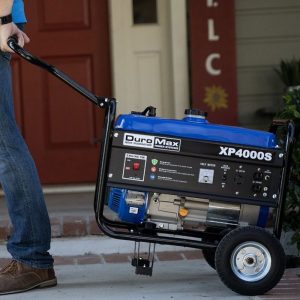 At a noise rating of 69 dBA (less noisy than an office), the generator is started via a conventional pull-start mechanism.

As the XP4000S has a relatively high THD (<12%), it is not recommended to use it to power sensitive electronic devices.

Even if this DuroMax generator isn't quite RV Ready, it still allows for an easy RV connection via an L5-30P to TT-30R adaptor, thanks to its L5-30R receptacle.

The DuroMax XP4000S has a conventional, open frame design, of the following dimensions: L23 x W17 x H18 in, which offers support and allows it to be raised above ground level. The design is ideal for rough environments and demanding outdoor use.

The XP4000S can be taken anywhere with you, thanks to its weight of 92 lbs. Additionally, the generator’s mobility is also improved by its open frame design, as it can be easily grabbed and shifted.

It is also possible to purchase the official wheel kit (opens in a new tab) to help you transport the XP4000S more easily.

The XP4000S's control center features a handy voltmeter that allows you to easily monitor power output anytime to aid you with the monitoring of its status and activity.

With the basic documentation and an owner's manual (opens in a new tab), letting you start the generator quickly, the DuroMax XP4000S also comes with several accessories, including: tool kit and funnel. An official storage cover is also available, as a separate purchase.

The DuroMax XP4000S is EPA-approved and CARB-compliant. It can therefore be sold and purchased in all 50 states, including California.

The DuroMax XP4000S versus other generators

The following charts are provided to give you an idea of how some of the key specs of the DuroMax XP4000S compare to generators of similar power (between 2500 and 3500 W).

As you can see from this interactive chart, when compared to other 2500-3500W generators, the DuroMax XP4000S is on the cheap side of the price range.

Do you own the DuroMax XP4000S and agree (or disagree) with these strengths and weaknesses?

The DuroMax XP4000S is covered under a warranty for up to 3 years. This warranty may be limited and may not cover all parts of the generator.
For more information about the warranty of DuroMax generators, please consult DuroMax's warranty policies (opens in a new tab). Alternatively, you can also contact their Customer Support: 1-844-DUROMAX (844-387-6629).