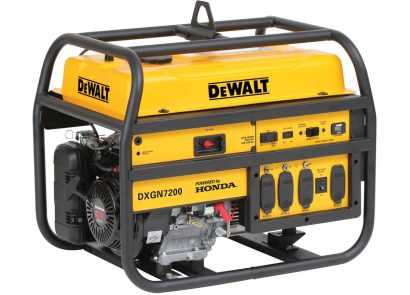 The DEWALT DXGN7200 is designed with the professional contractor or rental operator in mind. This unit is powered by a 389cc Honda GX390 manual/electric start OHV engine with auto shut off for low oil. The premium alternator provides low harmonic distortion. The large 8 Gal. tank with fuel gauge runs up to 13 hours at 50% load. Features include a hydraulic/magnetic circuit breaker that provides overload protection, a digital hour meter for monitoring run time and tracking maintenance and an idle control to reduce noise and save fuel. The steel frame is job site tested and includes a lifting hook. An optional wheel kit is available. (source: Dewalt (opens in a new tab))

Zoom on the Dewalt DXGN7200

In a nutshell, the Dewalt DXGN7200 is a portable generator mostly geared towards:

With a noise rating of 79 dBA (less noisy than a shower), the generator features a simple traditional pull-start mechanism, but also a convenient and easy-to-use electric starter (battery not included).

The DXGN7200 is unsuitable for the powering of sensitive electronic devices due to its relatively high THD (<6%).

Even though this Dewalt generator isn't quite RV Ready, its L5-30R receptacle allows an easy RV connection via an L5-30P to TT-30R adaptor. Besides, as it features a twist-lock L14-30R receptacle, the DXGN7200 is transfer switch ready: in case of a power outage, you will be easily able to connect it to a breaker box and power your household.

The dimensions of the Dewalt DXGN7200, which are L30.5 x W21.3 x H24.8 in, and its typical, open frame design provides stability and enables the generator to be raised above ground level. This type of design is ideal for tough environments and heavy outdoor use.

Although this generator is technically considered 'portable' (in the sense that it can be moved), its 195 lbs make it incredibly difficult to manually lift and transport.

A digital data center, one of the features of the DXGN7200's control panel, gives you information on the lifetime run hours, and thus, is helpful for the monitoring of its activity and status.

Along with the aforementioned features, from an accessory standpoint, the Dewalt DXGN7200's box includes the typical documentation and an owner's manual (opens in a new tab), which will help you start your generator promptly.

The Dewalt DXGN7200 is EPA-approved and CARB-compliant. It can therefore be sold and purchased in all 50 states, including California.

The Dewalt DXGN7200 versus other generators

The following charts are provided to give you an idea of how some of the key specs of the Dewalt DXGN7200 compare to generators of similar power (between 5500 and 6500 W).

Do you own the Dewalt DXGN7200 and agree (or disagree) with these strengths and weaknesses?

The Dewalt DXGN7200 is covered under a warranty for up to 3 years. This warranty may be limited and may not cover all parts of the generator.
For more information about the warranty of Dewalt generators, please consult Dewalt's warranty policies (opens in a new tab). Alternatively, you can also contact their Customer Support: 1-800-4-DEWALT (800-433-9258).