Home » Generators » Champion » 201160
WE ARE PROUD TO BE INDEPENDENT AND IN NO WAY ASSOCIATED WITH MANUFACTURERS. TO STAY UNBIASED, WE DO NOT ACCEPT FREE PRODUCTS. WE EARN FROM ADVERTISING FEES PAID BY HOME DEPOT OR LOWE'S ON QUALIFYING PURCHASES. 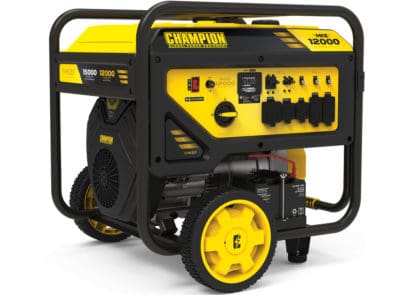 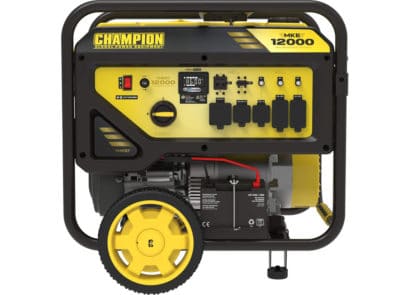 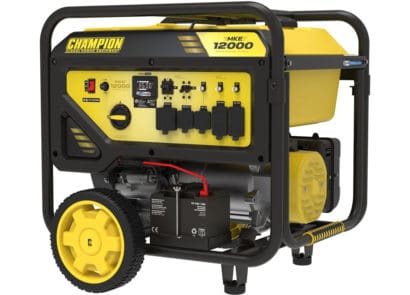 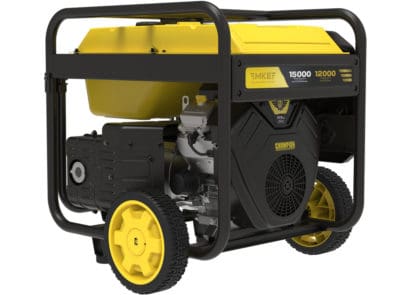 The Champion Power Equipment 201160 MKE 12000 Portable Generator is designed with your safety and convenience in mind. Owning this rugged 12,000-watt generator means the next time there’s an outage, the power in your house stays on. (source: Champion (opens in a new tab))

In summary, the Champion 201160 is a powerful portable generator especially useful for professionals who want to ensure that a power failure will not prevent them from working. 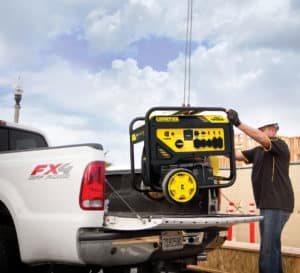 With a noise rating of 78 dBA (less noisy than a shower), the generator features a simple and elegant electric starter (battery included).

The powering of sensitive electronic devices with the 201160 is not recommended due to its relatively high THD (<20%).

Even though this Champion generator isn't quite RV Ready, its L5-30R receptacle allows an easy RV connection via an L5-30P to TT-30R adaptor. Besides, since the 201160 bears a twist-lock L14-30R receptacle, it is transfer switch ready: it is easily connectible to a breaker box and can power your home in case of a power outage.

The dimensions of the Champion 201160, which are L33 x W33.7 x H33.1 in, and its typical, open frame design provides stability and enables the generator to be raised above ground level. The generator is designed for ideal use outdoors and in rough environments.

As the generator's weight is 328.7 pounds, manually moving it or transporting it may be challenging, despite the fact that it is technically considered 'portable' (movable). Nevertheless, it can still be moved quite conveniently with the help of its wheel kit (⌀12") and its folding handle, once it is placed on the ground.

The generator comes with an additional safety feature, a lift hook on the top of its frame, which is helpful during its transport, loading and unloading. 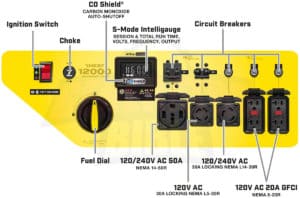 To help you monitor the 201160's status and activity, its control panel is equipped with a digital Intelligauge data center, giving you information on the lifetime run hours, frequency, voltage and power output.

With the basic documentation and an owner's manual (opens in a new tab), letting you start the generator quickly, the Champion 201160 also comes with several accessories, including: funnel and oil.

The Champion 201160 is EPA approved, but NOT CARB-compliant. Thus, it cannot be purchased or sold in California.

However, it features a spark arrestor and therefore, can be used in forested areas.

The Champion 201160 versus other generators

The following charts are provided to give you an idea of how some of the key specs of the Champion 201160 compare to generators of similar power (between 10000 and 14000 W).

As you can see from this interactive chart, when compared to other 10000-14000W generators, the Champion 201160 is on the expensive side of the price range.

Do you own the Champion 201160 and agree (or disagree) with these strengths and weaknesses?

The Champion 201160 is covered under a warranty for up to 3 years. This warranty may be limited and may not cover all parts of the generator.
For more information about the warranty of Champion generators, please consult Champion's warranty policies (opens in a new tab). Alternatively, you can also contact their Customer Support: 1-877-338-0999.