Home » Generators » A-iPower » SUA10000EC
WE ARE PROUD TO BE INDEPENDENT AND IN NO WAY ASSOCIATED WITH MANUFACTURERS. TO STAY UNBIASED, WE DO NOT ACCEPT FREE PRODUCTS. WE EARN FROM ADVERTISING FEES PAID BY AMAZON OR EBAY ON QUALIFYING PURCHASES.

The A-iPower SUA10000EC is a powerful open frame portable generator with a rated wattage of 8200 W and a starting wattage of 10000 W.
(Read full specs) 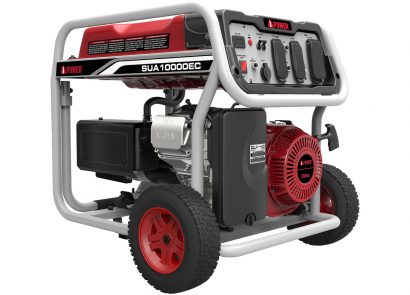 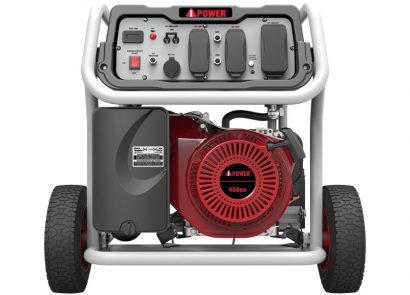 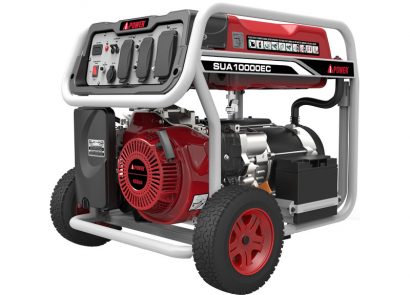 The A-iPower SUA10000EC provides 10,000 watts of starting power and 8,200 watts of running power. It’s perfect for the construction job site or as backup power for your home during emergencies. The generator features Pure Sine Wave Technology with less than 5 percent THD (total harmonic distortion). This technology can power sensitive electronics like HDTVs, tablets and laptops safely while continuing to power devices such as a microwave oven. (source: A-iPower (opens in a new tab))

In summary, the A-iPower SUA10000EC is a powerful portable generator especially useful for professionals who want to be able to deliver results, even during a power failure. 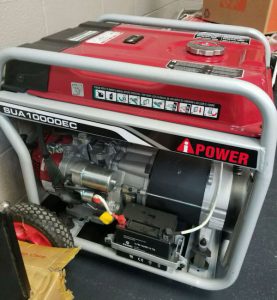 The generator is rated for a noise of 78 dBA (less noisy than a shower). Its starting mechanisms include a conventional pull-start mechanism and a convenient and easy-to-use electric starter (battery included).

The fuel capacity of 7 gallons allows the SUA10000EC to operate for around 7 hours at 50% load with a full tank (fuel consumption around 1 GPH).

Sensitive electronics can be safely plugged in the AC outlets, as the SUA10000EC produces a clean sine wave, with a <5% Total Harmonic Disruption (THD).

Additionally, it features 1 DC outlet: there's a 12V 8A (cigarette lighter style) receptacle with which you may charge your batteries with ease.

The A-iPower SUA10000EC has the following dimensions: L27.6 x W26.4 x H25.6 in. In combination with its conventional, open frame design, they provide support and allow the generator to be raised above ground level. The device has been designed for tough environments and demanding outdoor use.

Since the generator weighs 216 lbs, it will be incredibly difficult to manually lift it and transport it, even though it is technically considered to 'be portable' (in the sense that it is movable). Nevertheless, thanks to its wheel kit (⌀9") and its folding handle (a decent solution to its lack of maneuverability), the generator can be easily moved, once placed the ground.

To help you monitor the SUA10000EC's status and activity, its control panel is equipped with a digital data center, giving you information on the lifetime run hours.

With the basic documentation and an owner's manual (opens in a new tab), letting you start the generator quickly, the A-iPower SUA10000EC also comes with several accessories, including: tool kit and oil.

The A-iPower SUA10000EC is EPA-approved and CARB-compliant. It can therefore be sold and purchased in all 50 states, including California.

The A-iPower SUA10000EC versus other generators

The following charts are provided to give you an idea of how some of the key specs of the A-iPower SUA10000EC compare to generators of similar power (between 7500 and 8500 W).

As you can see from this interactive chart, when compared to other 7500-8500W generators, the A-iPower SUA10000EC is on the average side of the price range.

Do you own the A-iPower SUA10000EC and agree (or disagree) with these strengths and weaknesses?

A-iPower, a small company based in the USA, is a fresh face on the generator market. Their product line is comprised of engines, water pumps, pressure washers and of course, generators. The selection of A-iPower generators includes several conventional and inverted portable generators, many of which have an electric starter. The company has several facilities, including headquarters in California and a distribution center in Wisconsin. The production of their devices is, however, outsourced completely overseas, to China.

The A-iPower SUA10000EC is covered under a warranty for up to 2 years. This warranty may be limited and may not cover all parts of the generator.
For more information about the warranty of A-iPower generators, please contact the A-iPower Customer Support: 1-855-888-3598.