Home » Blog » What Is Backfeeding?

What is Backfeeding? How to Avoid the Dangers Associated with It?

Portable generators are widely used as a home backup power source. However, many people are unaware of the issues that can arise from an improper installation, and notably the dangers linked to backfeeding.

The versatility, convenience and ease of use of portable generators do not come without their own safety aspects. No matter how handy or high quality a generator is, never forget that electricity production is not to be messed with and, if misused, can potentially cause a lot of harm.

This article will explain what backfeeding is and how it occurs, present the dangers it can represent, and give indications on safety measures that can (and should) be taken.

Backfeeding is a flow of electric energy in the reverse direction of a circuit’s design, from the circuit to the source.

To elaborate, let’s consider a home circuit in the following scenario. Normally, a power grid is the main source of electricity, which flows from the grid to the home circuit via utility lines. 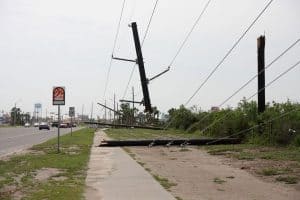 The former “normal” operation corresponds to the normal flow, for which both the circuit and the grid are designed. While during the outage, there is a reversal in the flow of electricity i.e., from the home circuit back to the grid.

This reversal of the electric energy flow is called “Backfeeding.”

While technically the term only serves to describe a flow of electric energy from the circuit to the source, it is often used as slang to describe the use of an alternative power source (a generator) in their home circuit, even while disconnected from the grid (which prevents its backfeeding). This is why you may find articles such as “How to safely backfeed…”, or phrases such as “Backfeeding a house…” 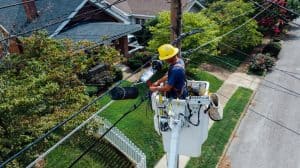 You may electrocute people working on restoring power

Backfeeding a power grid in such a way is not only illegal in most countries, but also very dangerous. It can cause serious harm to you, your neighbors, and the utility workers working to restore electricity.

Also, if the power comes back and the generator is still connected, there will be two power sources now connected to your home circuit. This puts a lot of strain on the generator and the home panel, which may catch on fire. 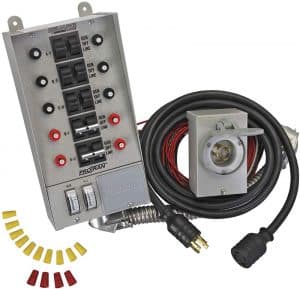 Use a transfer switch to safely power your home circuit

Backfeeding is a dangerous process. If anything goes bad, it can pose a serious threat not only to you, but also to your neighbors and utility workers. Therefore, special care must be taken while using a generator to power a home circuit.

Large permanent generators are preferred to power up a house. These can be installed permanently by means of a transfer switch. The transfer switch isolates the main circuit from the generator. Thus, prevents backfeeding. You can either use a manual or an automatic transfer switch for this purpose.

Portable generators, on the other hand, are not usually meant to power up an entire house. Most are fairly small and geared towards recreational or DIY activities. Although some powerful portable generators exist, many lack necessary power and are not designed to be installed permanently, as their biggest advantage is their portability.

So, in case of a small portable generator, it is better to mount the appliances directly onto the generator (with a properly rated extension cord – do not plug your appliance cord directly). However, if you have a large enough portable generator and you want to connect it to your home circuit, you must connect it by means of a transfer switch.

Please note that the connections of the generator shall only be done by a trained professional.

Is it possible to plug a portable generator directly into a wall outlet? 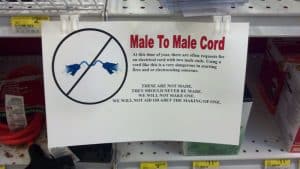 Male to male cords should never be used

A simple answer to this question would be yes, it’s possible, but NO, you shouldn’t do it!

First, to plug your generator into the wall outlet, you need a male to male cord (having both male ends). A male to male cord is very dangerous as both its ends are open. If anyone accidentally touches one end of the cord while the other end is plugged into the generator, it can cause electrocution of that person.

Powering a home by a portable generator is a popular practice. However, proper precautionary measures must be taken when doing so to prevent backfeeding.

Powering a home circuit via a portable generator should only be done by the means of an automatic or manual transfer switch. If you do not have a transfer switch, but wish to power your home appliances, you should mount them directly onto the generator, via a properly rated extension lead.

The installation of a portable generator on a home circuit should only be done by a trained professional. Under no circumstance, one should try and connect a generator to the home circuit by himself. This could result in backfeeding, which can be extremely dangerous.

Do you use your portable generator as backup power source for your home? Do you do it via a transfer switch? Are you aware of the risks associated with backfeeding? Let us know in the comments below.