Home generators are a great way to preserve your household during a crisis. But should you go for a standby, or a portable unit? What’s the difference between them? How do they compare? Which is better for you?

In this article, we will discuss the differences between the two types of generators, and compare them in more detail, in the context of their use as home generators, since that’s the only way to do so.

Let’s start off with getting our lingo straight.

Generators, engine generators, or gen-sets are devices which combine both a combustion engine and an electrical generator to convert fuel into electrical energy.

They are primarily characterized by their engine’s displacement, energy output (rated and peak wattage) – or equivalently amps and voltage, and runtime.

Other characteristics, such as outlet types, noise rating, weight, AC/DC, THD, etc. are also important and may have an impact on the device’s suitability for you. 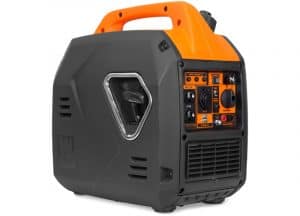 Portable generators are generators which can be defined as (what a surprise?) portable, movable, mobile or simply as easily carried around. Typically, this would be reflected in their dimensions and weight, which are aimed to be kept as low as possible.

These criteria will narrow down the displacement of their engine and in turn, their output. Typically, the truly portable generators, which can be carried in one hand, will not exceed 4 kW of power, since any devices beyond this rating reach into the 100+ lbs territory.

However, even the heavier devices can be transported using a wheel kit, which is included with most of them. Still, they become decreasingly portable.

On top of that, it becomes harder to find inverter, or even low THD devices among the larger models.

A typical portable generator will cost you anywhere between several hundred, to a few thousand dollars.

Stand-by generators (opens in a new tab) are generators which are not movable, mobile, portable or simply put, cannot be carried around.

They are typically installed next to a structure – a building, where they serve as a backup power source in case of blackouts, natural disasters and any unexpected surges in power requirements (typically in factories).

There is no reason to restricts their dimensions, nor is there any reason to restrict their weight – the advances in their technology therefore typically aim at improving their engine’s efficiency. Such generators can have an output of up to hundreds of MW – these would involve a turbine and natural gas of course and are pretty impractical for everyday use. A more typical power rating of home generators would be in the range of tens or hundreds of kW.

Installation of standby generators will require a skilled professional, or rather a team of them. The generator must be grounded and hooked up to the home circuit using a transfer switch. However, it has the added benefit of turning on automatically.

A typical standby generator will cost you anywhere from few to several thousand dollars. 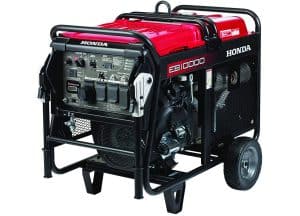 Lastly, we must address the category of what I’d call “technically portable” generators. These would be the devices with a power rating of 8 kW up, which start at around 185 lbs and only get heavier from thereon.

Unless you’re a powerlifter, it is pretty unlikely you’ll be able to move these anywhere without the help of a wheel kit. Even then, their movement is very limited and using them for recreational purposes, such as camping, would be somewhat impractical.

However, even with such a high power-rating, many can be purchased for less than a thousand bucks, which makes them attractive to those looking for an emergency power source on a budget. Therefore, they will be an important item in the following discussion 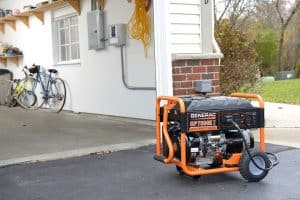 Now, since you are reading an article which compares standby and portable generators, I’ll assume you aren’t looking to power your RV or a lawn mower. So, which is better to run your house?

Right of the bat, it must be mentioned that any devices below 4 kW could struggle to power a household and will, ultimately, limit you to the use of only several crucial appliances. Simply put, they are not designed for this purpose – they are recreational, and more suitable for camping, tailgating, powering electric tools, etc.

Rather than for hooking them up to your home circuit, portable generators are designed to facilitate direct contact with the appliance (through a power cord of course, safety first!).

However, for many less-demanding folk, they may be an acceptable solution for mobile homes, small houses and in cases of absolute emergencies, in a regular household.

The choice therefore lies between the standby generators and the larger, “technically portable” generators. Here are a few aspects to consider.

The clear winner here is the portable generator, as they can and most likely will cost you many times less than the standby generator and can often be, with the help of a professional, hooked up to your home panel, which will further lower their cost.

Arguably, their maintenance might be cheaper as well. However, using a portable generator as a home generator will require you to set up an outside cover, which should be added to the final price estimation.

On the other hand, power-wise, the portable generator lags behind standby generators, which in terms of household use, can give practically unlimited outputs.

With a roughly 10kW portable generator, some compromises may be necessary, based on the size of your house, or rather your power demands. To fully evaluate them, we suggest using our very own free wattage calculator – No subscriptions to newsletters, nor even your email, is required.

Even though this is a heated topic of discussion, it is generally accepted that on average, standby generators are optimized for fuel efficiency and can last longer than portable generators.

However, this should not be taken for granted and we encourage you to evaluate on a case by case basis, for example, by using our website to order generators by their runtimes.

Note: Don’t be fooled! Runtimes differ based on the load at which they are measured. Always make sure that you are comparing values for the same load!

The winner in this case is clearly the “technically portable” generator, since even though it is in fact not that portable, you can still quite easily unhook it, move it to a more convenient spot, wheel it up on a pickup truck, etc.

Even though you may not find any use for this feature right now, the additional mobility might come in handy later on in your life. On the other hand, the lack of it simply won’t.

Though I admit I may be slightly biased, since I manage a website called GeneratorBible.com after all, I think we’ve laid a fair case here today.

Based on our discussion, I would say that what I would consider a portable generator would be insufficient to power most households. However, the “technically portable” generators are a much more attractive and viable choice, which will be sufficient for most. You can filter for these as “By Use -> Home Backup”, in the navigation bar above (or in the “hamburger” menu on mobile devices).

While standby generators offer much greater power and sometimes better runtimes, they are weighed down by their cost and lack of versatility. Therefore, unless the additional power is absolutely necessary, we would advise you to consider cheaper alternatives.

Do you use a standby, or a portable generator? What motivated your choice? Let us know in the comments below! 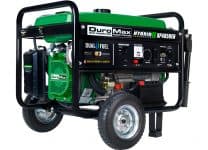 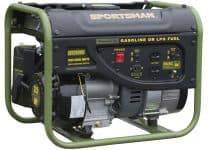 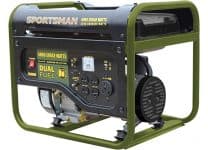