Home » Blog » Portable Generators vs. Portable Power Stations
WE ARE PROUD TO BE INDEPENDENT AND IN NO WAY ASSOCIATED WITH MANUFACTURERS. TO STAY UNBIASED, WE DO NOT ACCEPT FREE PRODUCTS. WE EARN FROM ADVERTISING FEES PAID BY AMAZON ON QUALIFYING PURCHASES.

Power equipment terminology can be confusing. See e.g., trimmers and brush cutters, which are often mistaken for each other, even by the most experienced outdoorsmen. Portable generators and portable power stations are yet another example of a confusingly named pair of devices.

Given that you’re reading this article, you’re probably wondering: Wait, those aren’t the same? What’s the difference?

As a good portable generator Samaritan, I wrote this article to address any confusion between portable gas-powered generators and portable power stations (gasless generators).

What follows is a brief rundown of each of these devices’ characteristics, what are their capabilities and limitations, how they differ, and most importantly – what they’re used for.

What Is a Portable Generator? 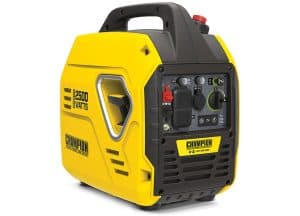 The Champion 100889 is a popular dual fuel inverter generator

Portable generators are devices which turn fuel, gasoline, or propane (for dual fuel units), into electrical power. They do so in a range of outputs from roughly 1,000 watts to over 20,000 watts (for most commonly available devices 1-10 kW). Their output is limited mainly by the displacement (volume) of their engine.

Naturally, any increase in a generator’s power output comes at the price of increased noise, fuel consumption, size, and weight – hence, at expense of their portability. The most powerful portable generators (> 10 kW) are essentially portable only in name and require the use of a (usually included) wheel kit to move around.

Check out our page that goes over the best portable generator brands. 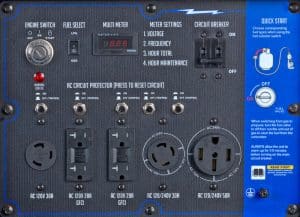 Portable generators provide power through their control panel, which can feature multiple power outlets, including 15, 20, 30, or 50 amp sockets. Generators do so by burning fuel, stored in their fuel tanks. These fuel tanks can be readily refilled upon burning through all fuel, which allows for essentially unlimited runtimes, provided you have enough fuel to keep them running.

Portable generators are capable of powering homes and RVs, although buying and installing additional connections might be necessary to do so. Modern devices can also be equipped with USB outlets, digital panels, CO detectors, or even linked to an app (such as the My Generator app for select Honda generators).

Given that portable generators are powered by combustion engines, they emit considerable noise. They also require you to handle combustible fuels, which is a fire hazard. This also prevents you from refilling the tank while the engine is still running, as the generator’s hot surface can induce combustion. On top of that, portable generators produce CO, which can kill you in a matter of minutes if the generator is used indoors.

What Is a Portable Power Station? 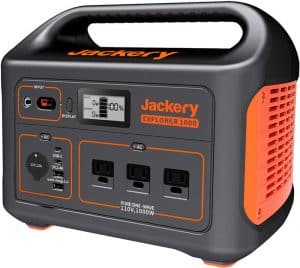 Portable power stations (also called gasless generators or battery-powered inverter generators) are devices which can store electrical power in an internal battery for later use. In essence, they are giant power banks. Portable power stations usually provide electrical power of up to 1000 W, although there are exceptions and devices with much higher capacity can be encountered on the market. However, their portability is questionable.

Battery capacity of a portable power station is quite commonly limited to roughly the value of their power in watt-hours (Wh), e.g., a 1000 W generator stores 1000 Wh, which means that they can provide their maximum output for up to an hour at end.

Since most portable power stations aren’t necessarily large and run from a battery, they usually tend to be much lighter than units with combustion engines. Some of lightest units weight less than 10lbs.

All portable power stations operate by inverting their battery’s direct current (DC) into an alternating current (AC), which means that they are suitable for powering any electronics. This includes phones and laptops. 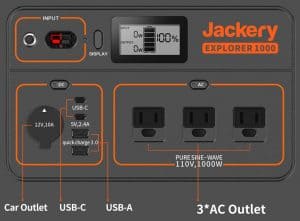 Although there are exceptions (units such as the Goal Zero Yeti 3000X can deliver up to 2000 running watts and 3500 starting watts), portable power stations aren’t as powerful as portable generators, and are only suitable for powering a single device, or multiple low-consumption devices e.g., running a small electric stove and charging a phone. To get a grip of the power consumption of common appliances, you can try experimenting with our wattage calculator.

Runtimes of portable power stations are limited by their battery’s capacity. Once the battery is depleted, they must be recharged by a conventional power source and thus, they cannot operate out of the grid for longer than a single afternoon unless you own a pricy set of solar panels or a wind turbine.

While portable power stations will always provide a 5 V or 12 V DC output (USB ports, automotive outlet, etc.), the least powerful ones do not offer any sort of 110 or 120 V output, and you will have a hard time finding one that delivers 240 V.

Portable generators and portable power stations have complementary characteristics. It follows that in most cases, they cannot be used interchangeably. For comprehension, I have created a table as a summary of the key points.

What follows next is a table of scenarios of possible applications for both devices, based on their aforementioned characteristics. Let us know if you come up with more illustrative examples and we’ll add them in!

In summary, portable generators and portable power stations are both devices which can be used to power various appliances. However, they have complementary properties which make them suitable for different circumstances.

If you’re choosing between the two, rather than going by what’s greener or cheaper, carefully consider the specific scenarios which apply to you. Are you planning to use them to power devices indoors or outdoors? If you wish to go camping, are you doing so for long periods of time in remote areas, or on camping sites with noise restrictions? Are you willing to pay extra for solar panels? If not, will you have a power grid frequently available to recharge a power station? Etc.