While searching for a portable generator, you may possibly never notice that apart from power, engine displacement, connectivity, etc., each device is also characterized by various altitude-related specs, which seldom appear anywhere in the manufacturer’s product sheets. 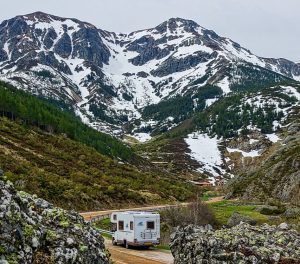 Altitude has an effect on your engines’ power

However, if you dig deep through the user manual, you may find them! Odd terms may appear among them, such as max safe altitude, rejetting, and various offers of so-called altitude kits. What are all of these about?

For many users, they are pretty much irrelevant, as their generators will not venture over 1000 ft above sea level (though we should note that at this altitude, your unit’s engine will lose roughly 3% of its horsepower).

However, maybe you’re planning an RV trip into the mountains, or more crucially, you wish to power an entire mountain cabin. Whatever your reasons may be, if you are planning to use your portable generator in high altitudes, you could be getting yourself into a mess, which must be adjusted for accordingly. But don’t worry, we’ll walk you through it.

All generators rely on combustion, and all combustion relies on enough oxidizer (opens in a new tab). In case of portable generators, the oxidizer is pretty much always air (the 21% of it, which consists of oxygen, to be more precise). However, the air is thinner in high altitudes, which results in the following. 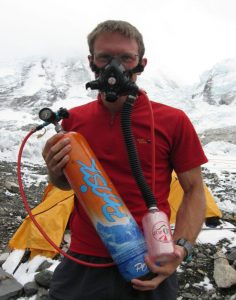 To expand on the presented problem, the oxygen levels in our atmosphere drop in higher altitudes (opens in a new tab). This drop may be quite dramatic, as you may recall from photos of mountaineers climbing Mt. Everest with bottled oxygen. This is an inevitable effect of gravity on the air molecules, which are more strongly attracted the closer to our planet’s core they are.

Generators behave in this regard pretty much as people. They are designed and rated for lower altitudes, as per PGMA G300 (opens in a new tab). Thus, they may run into all kinds of trouble when they find themselves in an environment where it may be harder to breathe.

Above a certain sea level, portable generators could have problems generating power. This is simply because the generator has less oxygen than needed to oxidize all the fuel injected into the engine by the carburetor.

A second effect of lower air density has to do with heat dissipation. Heat is a form of energy in motion and thus, requires a medium through which it can be transported out of the engine. This medium is, of course, air, unless you own some rare fancy, water-cooled unit. And if the medium is thinner, which it is in high altitudes, it carries heat less efficiently.

As we remarked above, engines lose roughly 3% of their horsepower every 1000 ft. Let’s imagine a scenario in which you wish to power a mountain lodge on some of the lower peaks of the Rocky Mountains, at a reasonable altitude of 6500 ft above sea level. This elevation results in 19.5% (6.5*0.03) derating of the engine’s horsepower!

Note: The above-mentioned example assumes that the generator is sized exactly to its engine’s size. However, there are exceptions and some devices may have a big enough engine! In these cases, the power loss in altitudes could be less noticeable, if at all. If you spend a lot of time in high altitudes, in addition to rejetting (described below), you may want to be on the safe side and acquire a generator that is properly sized to account for the power loss. Don’t hesitate to use our generator sizer to help you with that. 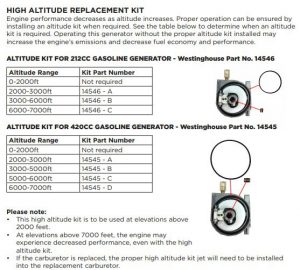 Since the main function of a generator is to provide a power source in remote areas, portable generator manufacturers have worked hard to solve the issue of gravity… or more specifically, thinner air in high altitudes. Many models can nowadays be made altitude-friendly by what we call rejetting. While it won’t solve the potential power loss issue, it will allow safe operation of your unit.

Rejetting means adjusting the fuel injection rate of the carburetor, so that the fuel/air ratio is adequate for the air density in your immediate altitude. Some manufacturers offer “altitude kits” for rejetting, while with others, you may have to rely on unofficially distributed equipment. In the latter case, we highly suggest referring to a professional.

Thus, if you’re planning to use your portable generator in high altitudes, always check the user manual for the maximum safe altitude. If the altitude you wish to use your unit in exceeds this value, we recommend using a suitable portable generator, which has a carburetor that can be rejetted, or can be adjusted via an altitude kit. 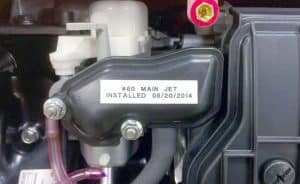 A label can help you remember what jet is installed (source)

Have you ever used your portable generator in altitude? How did it go for you? Did you notice a significant power loss? Let us know your experience in the comments below!