Diesel, gasoline, but also coal, wood and any other combustible fuel in general, is having a rough time right now.

Due to the environmental craze, CO2 has become the evil of the day, and consequently, many have been calling for the ban of diesel or gasoline generators, in favor of more environmentally friendly options, such as wind turbines, solar panels, water and geothermal plants.

Well, unless you live on a river, or near a volcano, the latter two options go right out of the window. Wind turbines, as wind itself, are pretty inconsistent in their output and should be considered as unreliable at best.

This leaves just solar panels. And indeed, for the past two decades, they have been the most discussed topic in the field of sustainable energy and have seen the most improvements in terms of their output.

So, do they make generators obsolete?

In this article, we’ll review some basic facts, before talking about efficiency, cost and environmental considerations.

To address the elephant in the room, yes, our site is solely dedicated to portable generators. However, we try to be as objective as possible and would not consider this article if we did not believe that generators can stand their ground against solar panels. In turn, we think solar panels are a very innovative, useful tool. They have a bright future, and in many areas, even an advantage over combustible fuels. 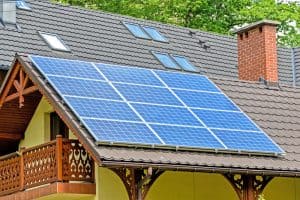 In very basic terms; Solar panels are made of semiconductors, which emit electrons upon impact by visible light (a more rigorous description is that they gain kinetic energy), which results in an electric current, or voltage, depending on your frame of reference. As a result, electric power is obtained. Pretty simple.

There are a few key points that should be mentioned. 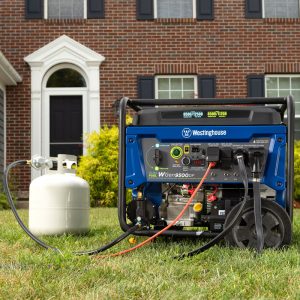 The Westinghouse WGen9500DF works on gasoline or propane

Portable generators are powered by combustible fuel, such as diesel, gasoline, or propane. Their engines are, as any combustion engine, designed so that the combustion is cyclical, perpetual and results in rotation. This motion induces current in an electric generator.

Solar panel manufacturers and environmental activists like to brag about the solar constant (opens in a new tab) – The Sun hits Earth with roughly 126.48 W per square feet. That’s enough to power everything, everywhere, and thus, we should aim to use solar only, right?

What you are less likely to hear from them is that at most, 75% of this energy gets through the atmosphere (opens in a new tab). A more reasonable estimate, for most of the Earth’s surface, would be around 50%. Thus, it would be more realistic to count with 60 W to 90 W per sq. ft on your average day.

This is still somewhat impressive, until you take into account that the efficiency of the best commercially available solar panels reaches barely over 20% (opens in a new tab), which means that 1 sq. ft of a panel will provide only 12-18 Watts.

In comparison, portable generators produce anywhere between 2 and 20 kW. At best, an average 5000 W generator must be substituted, on the sunniest day, by 278 sq. ft of solar panels.

How big is your roof again?

Even though solar energy has become roughly 20% cheaper over the past 5 years, the cost is still somewhat high. It varies a lot, and any estimate should be considered as rough, since there are many sources, vendors, makes, and types of panels. However, from the info I have found (opens in a new tab), in 2022, the cost of an average solar panel can be estimated as $3 per Watt.

The upside is, of course, that if you buy the panel, you will get your money back over time, since the generator runs on fuel. To illustrate with that aforementioned generator… The current price of a gallon of gasoline (as of June 2022) is roughly $5 per gallon. Until you have burnt through $12,000 of fuel, which amounts to 2,400 gallons, you’re set. That equals to 3,809 hours of constant runtime at 50% load, or 158 days, which add up to almost half a year.

What I want to point out here is that obviously, it is more economical to run your house on panels, rather than a generator. However, as a back-up source, or for recreational activities, the panel seems unreasonably expensive.

But what about the environment?

Well, good point. Burning fuel is for sure worse than not burning anything at all. I can and will admit that. In terms of long-term, sustainable power, generators are lagging behind solar panels. At least as far as emissions go.

However, let me remind you that the world is not black and white. Even though solar panels are mostly made of crystalline silicone, their components include metals and heavy metals (opens in a new tab). The production of pure, monocrystallic silicone is also not exactly environmentally friendly (opens in a new tab). And to add fuel to the fire, there have been many reports of illegal toxic waste dumps associated with solar panel manufacturing plants.

Furthermore, there is no economically viable option to recycle solar panels. And don’t get me even started on storage of the energy, e.g., batteries, which contain lithium, or sometimes even cadmium. One of which is outright toxic, but mining of both involves enormous amount of pollution (opens in a new tab), which will only increase with their demand in the following years.

While it is fun to compare which is better at what, the key point of this article should be that generators and solar panels simply function differently. They both have their upsides, downsides and as a result, their purpose differs.

Solar panels should be used as a sustainable power source, which requires a large investment, but in the long term, is worth the trouble.

Vice versa, generators should be used as a power source in conditions, in which a power grid, or space and budget for panels, is out of the question.

There are some cross overs, such as RVs, which should be judged on an individual basis – Most importantly, will panels be used often enough to justify their cost? Do you have enough space for a panel? How much power will you actually need?

In the end, you’re the one to decide what’s best for your circumstances. For now, we leave you with a table of pros and cons.