Have you ever noticed how every Honda portable generator name seems to have some logic behind it, but you can’t quite grasp what it is?

You’re not alone! I took an afternoon off to research the topic and after a few email exchanges with Honda’s support team, I bring you the answers!

This article will help you not only understand how and why Honda generators are named. By the time you’ve finished reading this piece, you will also have a deeper understanding of the wide range of choices that Honda offers, and also generators naming patterns across the board.

Spoiler alert: The final characters in a model name may sometimes have little to no usefulness for the consumer.

Manufacturers have two options when it comes to naming parts and products. These are called significant and non-significant (opens in a new tab) part numbers.

Significant naming patterns are used by most manufacturers. These names follow the manufacturer’s systematic naming scheme, which characterizes the product. In case of portable generators, names usually contain info on the product series and wattage of the model, such as ECHO EG-10000. Sometimes, other information is added, for example an “i” for “inverter”, as in ECHO EGi-2300.

Other brands simply pick a seemingly random series of numbers or letters, such as Champion 100889, which hold no particular meaning. These are called non-significant part numbers.

Honda, a power tool giant with thousands of products on the market, uses the prior naming system.

Because Honda manufactures the most reliable and popular generators currently on the market and has possibly the most intricate naming system of all portable generator manufacturers, I decided to dedicate a short article to decrypting their naming pattern.

You probably already stumbled upon the “EU2200iTAN” model name while browsing for the EU2200i. Keep reading to find out what this means…

Honda has a systematic naming format, from which a lot can be said. The model name can be viewed as a grid, separated into individual fields, each of which carries information about what is in each box. Everything from the device type to its color can be included in the name of a generator.

There seem to be 3 naming formats, which can be separated into a grid of 7, 8 and 11 fields. However, most sites, including our own, will only show the first 5-6 fields, since these describe the model in general, whereas the rest differs from model iteration to model iteration. I will distinguish the two as “model specific fields” and “versioning fields”.

What I deem to call the “model specific fields” is a pattern which describes every generator of that “type”, regardless of where you buy it, where it was made and what color it is. The pattern holds across all models produced anywhere between the 1980s and the 2020s.

When divided into an information-based grid, a name of a Honda generator features the following model specific fields:

As you can see, the names of Honda generators are extremely information dense. Some fields are optional, whereas others convey information even by a blank space.

I will now go through each of these fields and explain them in further detail, so that you can do the same with any Honda generator.

Honda has many generator series, all of which have their design specifics.

There are currently 4 Honda generator series actively manufactured, labeled by the letters B, G, U, and M. 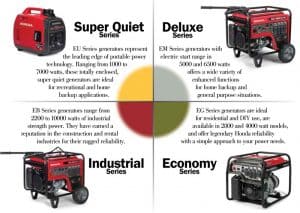 Owners of older models must dig deeper. The following table lists the discontinued Honda generator series, dating all the way back to the ’70s.

This field is optional and used quite scarcely. The S stands for electrical starter. This designation can also be found at the end of the name.

The remaining two options, V and X, are only found in the EVD and EXW series and refer 120/240 dual voltage and “welder”, respectively.

Most generators on the market indicate their wattage in their name. Honda is not an exception. Presumably for marketing purposes, the number refers to the peak or starting watts – the maximum wattage that the unit can achieve. Keep in mind that this is NOT the actual wattage of the generator, the running or rated watts.

This field may further indicate the generator type and is optional. It is sometimes used to differentiate between diesel (D) and gas-powered (GP) versions of a generator. In other cases, it may indicate that the unit is an inverter generator (i), or that it uses Honda’s patented CycloConverter technology (c).

The currently most common designation, CL, indicates a newer generation of generators, which have a 3 times higher fuel capacity than the previous.

If left blank, indicates recoil start. Otherwise, S/s indicates electric start (lowercase s if after i), which as mentioned above, may be equivalently indicated in front of the peak wattage number.

An X indicates that the generator’s engine is of the iGX series (opens in a new tab). iGX engines feature an integrated ECU (electronic control unit) with a self-tuning regulator (STR) governor system, which allows communication with the machine they are powering. They are easier for inexperienced users to operate and easily maintained.

The remaining fields, which I deem to call “versioning” fields, differ by their number and what they indicate from model to model. They follow the “model-specific” fields and can usually be spotted only on individual boxes or in more detailed catalogues – you will not find them on our site.

There have been at least 3 different formats of them, and the current will be most likely changed in the future again.

In general, their information includes:

Ultimately, most of these fields are more relevant to logistics workers, rather than consumers. We suggest contacting Honda support team if you ever need to figure out one of these codes.

The table below shows several decrypted names for illustration.

In summary, we have taken a deep dive into Honda’s model naming scheme. We have shown that each model name can be divided into a grid, of which some fields are model specific and others version specific.

The model specific fields include crucial information about the device, including the series, peak wattage, which engine and starter it uses, if it is an inverter generator, and more.

The versioning fields are harder to pinpoint, as their format varies from model to model. However, they can be useful if you wish to determine which distribution is in your box, where it was produced, what color it is, etc.

Hopefully, you can now navigate our product database with a better understanding of how not only Honda’s, but also many other brands name their models. If you ever find yourself struggling with the naming schemes of Honda, I strongly recommend contacting their very helpful support staff.

Did this article make you stop scratching your head over all these model numbers? Let us know in the comments below! 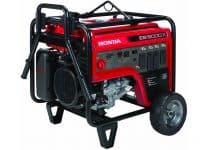 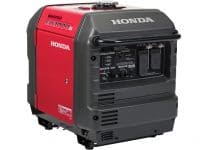 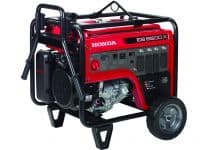 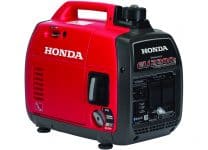 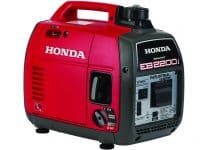