Home » Blog » Anatomy Of A Generator

What’s in a Generator and How Does It Work?

A generator is an electrical device which converts chemical energy (fuel) into electrical energy. It is generally composed of an engine and an alternator, which are powered by some fuel source. 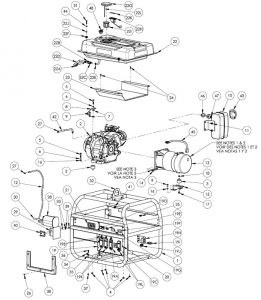 The power produced by a generator can be utilized as a backup, in a case of a mainline interruption, a blackout, or just for recreational purposes.

Smaller, portable generators are widely used in households, RVs, food trucks, etc. While the larger, high-power generators find their use in construction, by DIY professionals, etc.

How Does a Generator Work?

A generator consists of three main parts: A fuel system, an engine, and an alternator.

The fuel system supplies stored chemical energy to the engine, where its combustion takes place. As a result, mechanical energy is generated, which is supplied to the alternator.

The alternator then converts this mechanical energy into electrical energy.

The components vary from generator to generator. Different models and different companies offer various functionalities that differ in each model.

However, there are some essential components that are present in all generators. These include: 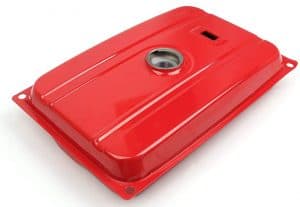 Every generator has a fuel tank. Fuel is stored here to continuously provide power.

A fuel pipe is used to transfer fuel from the storage to the engine. A return pipe returns the fuel back to the storage tank.

A filter is present to filter out any solid particles, before the fuel enters the engine. Fuel is then injected into the combustion chamber of the engine via a fuel injector.

There is also an overflow connection to avoid the overflow of fuel. In case of an overflow, it channels the fuel away so that it does not spill onto the engine or the alternator.

The engine is the heart of the generator, where the combustion takes place.

Fuel is injected into the combustion chamber by a fuel injector. A spark plug produces a spark and starts the combustion process during which the chemical energy, in the form of fuel, is converted into mechanical energy.

This mechanical energy is then supplied to the alternator. 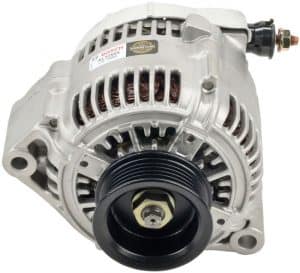 The alternator is where the conversion of mechanical energy to electrical energy takes place. It has two parts: A stator and a rotor.

The stator is a stationary part. It consists of a set of closely wound coils, positioned around the rotor.

The rotor is a rotating part. It is responsible for the production of a magnetic field.

The engine provides energy to rotate the rotor. A rotating magnetic field is produced, which induces electricity in the stator through electromagnetic induction.

The output of a generator is not very smooth and contains undesired ripples. A voltage regulator is thus installed to filter out the ripples and produce smooth electrical power.

During the operation of a generator, heat is produced through fuel combustion, friction, and metal contacts. This heat is highly undesirable and may even burn the generator. Therefore, the generator must have some cooling mechanism.

This may be a cooling fan or a cooling liquid, most commonly water in stand-by generators. Water is run through the generator via pipes. It absorbs the heat from the generator and releases it in the surroundings. Portable generators are usually air cooled.

During combustion, some amount of harmful and toxic gases is produced and must be directed away from the system. Air vents and exhaust pipes are used for this purpose.

The exhaust system must comply with health and safety regulations.

Friction between the metal components in the engine is undesirable, as it may cause overheating and wear out the device.

Therefore, a lubrication fluid (oil) is applied to keep the metal contacts lubricated, reduce friction and absorb the heat produced by friction. 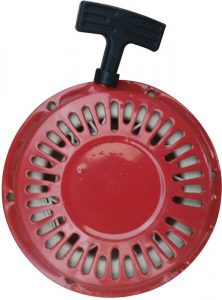 There are two main ways to start a generator: A pull cord mechanism and a starter motor.

A second method is the use of a starter motor to start the engine. This starter motor is powered by a DC battery.
The battery is then recharged, either separately or by the output of the generator.

A circuit breaker is a device which protects the generator from damage during an electrical fault. In case of a fault, it triggers a trip mechanism to ensure safety of the generator’s components.

The control panel of the Generac iQ3500 inverter generator

A control panel is the control system of a generator and contains all the inputs and outputs. It’s where you’ll find the different outlets available for you to power your appliances.

Many generators have some sort of a data center that can display the current, frequency, voltage and power produced by the generator. Some also have a fault indicator, fuel gauge, and a temperature gauge.

The frame/housing is a mechanical structure which supports the generator and holds all its components, to ensure their safety and grounding. The frame also ensures a portable generator’s portability.