How to Break in a Generator. A Guide.

Searching through the internet, you may have found heated debates discussing if you should or should not break in your generator and how exactly it should be done. Do you want to be left behind?

Of course not! Breaking in your generator is crucial for its longevity and may add thousands of hours to its lifespan. But how to go about it?

Following our series of articles aimed at new portable generator owners, today we shall discuss how and why you should break in your generator and, by extension, any small combustion engine.

In short, the process ensures internal stability of the engine, proper lubrication, flushes out initial metal contamination and prevents what is known as blow by. Let’s discuss why and how.

What Is Breaking In?

While many of us may imagine the insides of an unused engine as a smooth, polished and crisp clean surface, the reality is quite different. Inner surfaces of an engine’s cylinder walls of engines are honed (opens in a new tab) with a cross-hatch pattern, with small peaks and valleys. The valleys are designed to hold oil, while the peaks are made to be grinded down to their optimal level by the engine’s piston.

By breaking in an engine, we refer to a controlled run, which aims to properly lubricate these cylinder walls, grind them down to their optimal levels and flush out all the metal contamination left behind by the process.

Why Should I Break in My Generator? 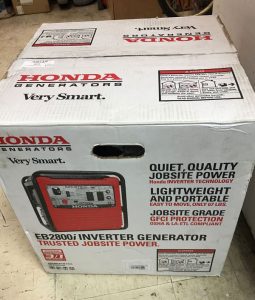 A portable generator can be a real investment, worth to be looked after. Pictured: Honda EB2800i

Without a proper break in, you risk that your engine will be improperly lubricated, which may result in what is known as a dry start. This is one of the major causes of engine damage.

In addition, improperly settled engines run a risk of developing a layer of carbon build-up over time (carbon is a by-product of combustion). As a result, fumes may leak through the poorly sealed areas. This may also happen if the engine is running underloaded too often and its piston acts upon the walls with low pressure.

The passing of fumes along a poorly settled cylinder is referred to as a blow by (opens in a new tab). It will most likely not be noticeable at first, but over time will build up in intensity. Blow by may become visible near the crankcase ventilation outlet, as excessive steam or even liquid.

Lastly, as mentioned above, the cylinder wall is grinded into and significant amounts of metal contaminants are released and circulated throughout the engine. If proper procedure is not followed during the first few hours of operation, these metal particulates may cause damage to the engine.

Even though most user manuals neglect a proper breaking in procedure, they always warn you to change the oil just a few hours after a fresh start.

How to Break in Your Portable Generator’s Engine? 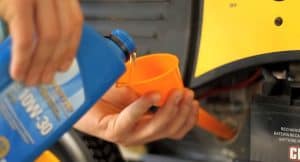 So, how do we go about breaking in the engine?

As always, I will strongly suggest you follow your respective user manual. However, based on my research, very few of them actually recommend more than just changing your oil after the first few hours. While this may be sufficient to prevent immediate damage to the engine, there are a few more practices which I would like to add to the list.

What you will need:

Remove the spark plug and add a few drops of oil conditioner into it. Use a funnel if the can has an impractical outlet. Slowly pull the starter cord 5 to 10 times. You are not attempting to start the engine, just letting the pistons lubricate. When done, replace the spark plug.

Add conditioner into the crank case. Follow up by adding oil. Follow your user manual for the correct filling procedure.

Fill your fuel tank according to the user manual.

Note on filling: During the first run, you should fill both oil and fuel to their maximum capacity, even though you’ll be later draining the oil multiple times. Maxing oil levels is crucial for proper lubrication. However, make sure to NEVER OVERFILL!

When it comes to the actual break in procedure, there are many conflicting sources and tips. However, most will agree that during the first hour, you should leave the generator run without any load, unless otherwise specified by the user manual. This lets all the mechanical parts settle smoothly and all the fluids start circulating where they should.

After this period, drain all the oil and refill. You may notice that the oil looks surprisingly dirty. This should improve in the following steps. There is also no need to change the fuel.

Some sources recommend running your generator for a second hour without any load, to properly flush out the metal contaminants. Others don’t bother and skip to a loaded run. We’re adding this step as optional, to reflect the current state-of-the-art.

The last step is somewhat of a point of contention in the generator community. Some sources mention running your generator for a third hour on a low, 500 W load, after which “the generator is officially broken in”. Some users seem to follow this practice, others jump into higher loads right away.

However, as I’ve already mentioned, running a generator underloaded leads to a lower pressure exerted on the cylinder walls. 1-3 hours won’t cause any damage to your device, but the piston is yet to be properly seated. You should probably not consider the engine to be broken in.

I therefore find it important to follow guidelines of other sources, which recommend running the generator at a heavy load (at least 75%) for anywhere between 50 and 100 hours (opens in a new tab), depending on the size of your generator. Oil should be drained and filled up during this period, as called for by the user manual, and after it.

Note on Underuse: Rather than by wearing them down, engines suffer more damage by being underused. Therefore, even though this procedure may seem as somewhat of an overkill, we recommend running your generator for the aforementioned 50-100 hours. However, you should also do so every month, to ensure that it remains functional once you actually need it.

It is also worth noting that in general, you should run your generator at an at least 50% load at all times. We recommend reading this source (opens in a new tab) and especially pay attention to the low load management section, if you ever find yourself underloading your generator.

While it is commonly spouted that small engines don’t need to be broken in and will do so on their own during use, I beg to differ. An engine is an engine and all the considerations that would apply to your car will apply to a generator, lawn mower, trimmer, etc., as well.

While many may feel that breaking in is unnecessary for most outdoor power tools, I urge you to at least not skip out on your generator. However, don’t neglect other gas-powered devices as well (adjust runtimes by device). The procedure only takes a few hours and will save you a lot of money and trouble in the long run.

How did your break in procedure go? Let us know in the comments below!